Why has Zara changed its logo?

Zara, founded in 1975 in Spain, made a dramatic introduction to the world of retail – the very new concept of “fast fashion”. Zara aspired to create responsible passion for fashion amongst a broad spectrum of consumers, spread across different cultures and age groups.

A unique model, the backward and forward integration across the supply chain, a technologically savvy organisation, the wonderfully controlled warehousing and dispatch mechanism, the giant network of dedicated supplier factories and a hugely motivated work force all over the globe, have all since contributed in making it the largest fashion chain brand in the world.

The company’s last official annual report of 2017 indicates a top line of Euro 16,620 million nett sales from a battery of 2251 stores worldwide supported by 46 online markets in regions of India, Malaysia, Singapore, Thailand, Vietnam and others is the APAC.

Since 9th of February 2019, Zara, one of world’s most successful fashion retail brands is suddenly in the critique limelight. Being criticized is not new to Zara. In the past, it has been brewed in controversy for its manufacturing practices & waste issues. But this time around, it has drawn attention to something completely different — its new logo.

While one is used to seeing bold, wide letters, the new version – designed by the Baron & Baron agency – sees them much closer together, and with a curvier font. Its previously spread-out letters are now overlapping, featuring the four-letter brand in a more tightly keened design.

What could have caused Zara to do so and invite the wraith of the troll brigade? The social media circuit is abuzz with all kinds of opinions, remarks, trolls and even backlash. People have used social media to express their disappointment on the Spanish brand’s SQUASHED new look.

The controversial new design now reflects the evolution of fashion branding. And because of that, its fans are weighing in on Twitter with their own arguments about the type design. It does although bear some similarities to its previous logo, which was dropped in 2010. While the previous logo had ample space between the letters, creating a sense of airiness and minimalism, the new logo squashes all the letters together, the edges and serifs tangling into one another like they are struggling to break free.

While the brand has not yet given any official clarifications on this, but could the answer lie in the changing market dynamics? Or, has it got to do with the way fashion is going to be consumed going forward? Or, has it got to do with how the current demographics view a brand and its value proposition? Is fast fashion being questioned for its role in the sustainability and environmental issues? Or, is the desire to seek heritage value the key reason for a ‘new look’ Zara?

Redesigning the logo is not a new phenomenon. In the branding history, several brands across categories have changed their logos to remain in line with their current times. In the recent past, several other brands like Burberry, Celine, Calvin Klein, Formula One, Yankee Doodle, Marriot Hotels, Visa, Cadillac and even Face book and Instagram changed their logos.

So, is Zara simply following a trend? Most unlikely since it has been a sort of a trend setter and has had many follower business models adopt his innovation of 1975.
The New Consumer: Various reports ranging from a Bain & Company, Nielsen as well as the latest combined report by BOF & McKenzie on fashion trends throw up some common trends for the generation Z. All point towards the fact that luxury as well as fashion brands cannot ignore the new demographic need & behaviour of this digital native.

To capitalize, brands are adapting to the preferences of younger consumers in terms of product offerings, communication and engagement strategies, and distribution channels.

Ethical companies with a Social purpose is the new black: Gen Z consumers are mostly well educated about brands and the realities behind them. When they are not, they know how to access information and develop a point of view quickly. If a brand advertises diversity but lacks diversity within its own ranks, for example, that contradiction will be noticed. In fact, members of the other generations share this mind-set too.

A majority percentage of them try to purchase products from companies they consider ethical. Most remember at least one scandal or controversy involving a company. They try to learn the origins of anything they buy—where it is made, what it is made from, and how it is made. They simply refuse to buy goods from companies involved in scandals.

Fashion companies must come to terms with the fact that a more distrusting consumer is expecting full transparency across the value chain. The need is to regain trust by adopting to new technologies and giving up old norms that do not play well with the value systems of the new youth. Going forward, the ones who can succeed will be those who accept the new paradigm taking shape and provide transparency via advanced technical tools exploiting AI, Block chain and such.

While Luxury and premium segments expressed overall optimism, the value, bridge and mid-market players appear to be more cautious. The ability for brands to be able to trace every step of the value chain – from raw material sourcing to textile manufacturing to garmenting process to even shipping, the fashion brands need to adopt a more responsible and ethical stand by owning responsibilities for the vendors systems too.

Environmental impact and the sharing economy: Consumers’ social media habits coupled with a desire for positive social impact leave a purchasing paradox. On one hand, no one wants to be photographed twice, and the demand for an ever-changing closet has never been greater. This has after all been the basis and a result of fast fashion and social media. On the other hand, consumers are more outspoken than ever before about the industry’s negative environmental and ethical impact. Younger consumers are seriously concerned with social and environmental causes, which many regard as being the defining issues of current times. They hence work towards a compromise that can satisfy both the objectives.

As a result, the lifespan of fashion products is thus being stretched as pre-owned, refurbished, repaired and rental business models continue to evolve. Across many categories consumers have demonstrated an appetite to shift away from traditional ownership to newer ways in which to access product. With the rise of the resale and rental fashion market, there are signs that 2019 marks a turning point in the way that we consume fashion.

Disruption and the role of small challenger brands: According to McKinsey and Company’s report with Business of Fashion, 79 percent of fashion industry executives believe self-disruption among legacy brands to be one of the top five trends shaping the industry this year. Established brands increasingly feel the pressure to innovate as younger consumers gravitate towards smaller, more nimble brands. These “challenger” brands, as they are called in the report, are capturing market share at a lightning speed due to their ability to authentically communicate their values and engage with their online communities.

Technology and social media are enabling a new breed of ‘challenger’ brands that disrupt a sector or category where incumbent players have rested on their laurels. Meanwhile, to compete and stay relevant among demanding young consumers, traditional brands are echoing this dynamic and disrupting their own brands, offerings and business models.

Zara has entrusted the creative direction of its new look to Baron & Baron, also responsible for rebranding of luxury brands like Burberry, Dior & Maison Margiela – perhaps hinting towards Zara’s intention to re-establish itself among high-end fashion houses having strong brand heritage? As the brand founded in the mid-1970s, Zara seems to be claiming its place among the older, more established brands of the world, rather than among than the new generation of fast fashion retail brands. That is well and good. But would it have killed Zara to add just a little bit more space between the letters? Just for readability?

There could be many reasons behind the ideology of new logo that is squashing all the letters together. While the social media have all been changed, it is currently unclear when store signage will be updated – which we believe will provide us plenty of time to get used to the new version. 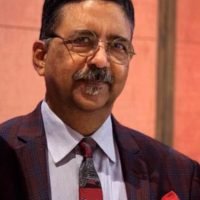 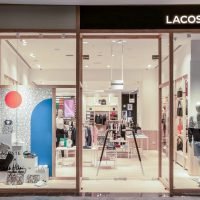 Lacoste opens a new store in Singapore
Next Article 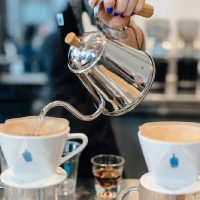 Blue Bottle Coffee arrives in Seoul in May