Department store operator Lifestyle International Holdings Ltd on Thursday said it had won a tender for a commercial site in Kowloon for HK$7.39 billion ($952.8 million).

“The group has long been looking for a sizable property in the Kowloon Peninsula in Hong Kong for the establishment and operation of a full-fledged department store,” the operator of Sogo department store said in a filing to the Hong Kong bourse.

The site was expected to fetch between HK$6.58 billion and HK$10.4 billion, according to four surveyors polled by Reuters.

Lifestyle, which operates department stores in Causeway Bay and Tsim Sha Tsui in Hong Kong and is 23.2 percent owned by its second largest shareholder Qatar Investment Authority, said the deal will be financed by internal resources and bank borrowings.

The site, covering 14,159 square metres in Kai Tak in Kowloon, is planned to be developed into twin towers with a gross floor area of up to 101,944 square metres, it added. 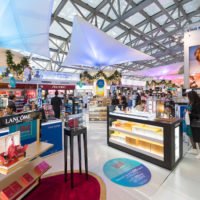 This is the fastest growing category in travel retail
Next Article