Why you should adopt more diverse influencers?

Diversity, or lack thereof, is at the forefront of fashion industry discussions, with runways and advertising campaigns constantly—and rightly—scrutinised.

Less has been said about diversity among prominent influencers, the new drivers of sales who are celebrated for their authenticity and ability to connect with customers.

Thin, light-skinned women aren’t the only clothing shoppers, so why are so many of them the go-to for brands as they put together campaigns?

Now several influencers, and a handful of talent agencies that represent them, are leading the charge to shake up the staid and stale landscape.

They’re creating their own campaigns to highlight opportunities and content possibilities—along with #YouBelongNow, there are the hashtags #SupersizeTheLook and #ChicAtAnyAge — putting together initiatives to encourage and celebrate new voices in a greater range of ethnicities, sizes, and ages.

The problem, many say, stems from the fact that the people organising the campaigns are not thinking about diversity when it comes to casting. It’s a continuation of the narrow view of beauty historically depicted in advertising, contends Jennifer Jean-Pierre Maull, a Haitian-American blogger and photographer from Washington, D.C with almost 16,000 followers on Instagram. “We need to change what we consider beautiful, we need to change what we consider marketable,” she said.

Consider trendy online retailer Revolve: known for its influencer trips to far-flung corners of the globe, documented glamorously and exhaustively for its 2.6 million Instagram followers.

Last January, as its squad took to the beach in Thailand, the attention turned from glowing to heated over the lack of diversity in its ranks. A shot of more than a dozen light-skinned swimsuit-clad slender women garnered more than 700 comments. A commenter tagged the picture #RevolveSoWhite.

Revolve, which recently filed for an IPO and generated sales of $400 million last year, has never been a brand to highlight diversity, but whether or not that has had an effect on its sales is unclear.

Revolve’s earned media value (EMV) dropped during the controversy to the brand’s lowest for the year, at $83.8 million. That cannot be solely attributed to the controversy, however, but “to the natural ebb and flow of events and campaigns.” And the dip was temporary: Revolve’s EMV bounced back to more than $140 million in each of the subsequent two quarters.

In the firestorm, Valerie Eguavoen saw an opportunity.

As the moment drew headlines, the North Carolina-based blogger and social justice advocate seized the chance to launch a new Instagram handle, @YouBelongNow, designed to celebrate people of all ethnicities, religions, sexualities and clothing sizes.

“There are so many women who I could have seen on that trip, who belong in this space,” she said. “We have to get rid of this narrative that we don’t exist or it’s hard to find us.”

Jean-Pierre Maull has kept tabs on what talent agencies she booked gigs with and which ones she hasn’t. In the latter camp was Fohr, based in New York and co-founded by James Nord. Over the summer, Nord addressed the Revolve controversy in a YouTube video, calling the retailer out for its practices while also suggesting it could be intimidating for brands to reach out to new influencers. Jean-Pierre Maull penned her response in a lengthy blog post. “Our POC (people of colour) community is not an alien force,” she wrote. “It is not hard to send a POC blogger the same pitch email that you send to others.”

She emailed Nord, requesting to talk with him, one of many ongoing discussions Nord has had in recent months. “I leaned on this group of amazing women who did call me out,” he said.

“Sometimes we just need to open up the conversation instead of just being angry,” Jean-Pierre Maull said. “Those in power must be self aware enough to see where they may be lacking or not doing enough.”

One result of the chats Nord has had is a new mentoring program, called Freshman Class, to promote underrepresented influencers. More than 1,600 influencers applied, and 85 finalists were chosen. The ten winners include Alysse Dalessandro, queer plus-size fashion blogger; Ali Hemsley, a fashion influencer with a focus on chronic illness and mental health; and Destin Grayson, a menswear blogger. The winners will be flown to New York for three days of educational and networking opportunities.

Nord hopes to help newer and lesser-known influencers build a network that can serve as sounding board, to discuss opportunities and pay rates.

Jean-Pierre Maull said she was worried the initiative would seem like “someone need to swoop in and save” POC bloggers.

The result, she says, has been anything but; it’s helping establish even more of a sense of community.

Relatability is a crucial part of influencer effectiveness, which is all the more reason why influencer campaigns should feature a more diverse range.

Old Navy, a division of Gap Inc., looks for a range of sizes and family compositions in its influencer casting, then features them as models in its social feeds and digital marketing.

“We’re looking for someone who people can see themselves in,” said Liat Weingarten, Old Navy’s vice president of brand communications.

So far this year, Old Navy’s top two performing social posts featuring people (not just product), based on number of likes, comments and shares, are diverse group shots of influencers.

One, highlighting dresses from its #SizeYES campaign, received more than 11,000 likes and more than a hundred comments. “My first thought when I saw this was: love this beautiful, diverse group of models!” wrote one commenter. “More of this, please!”

And then there’s Revolve competitor Fashion Nova, which uses its Instagram account to highlight women of all ethnicities and sizes in its barely-there clothing.

Its influencer hashtag, #NovaBabe, drove $54.1 million in earned media value from the second half of last year through the first half of this year.

Mentions for @fashionnovacurve, the account for its plus-size line, generated $61.5 million in EMV.

“When I go to events, I feel like there’s no one like me,” said Silva, whose followers have asked why she was the only woman of colour or woman with curly hair at a party “I live in New York City, how could there not be one other Puerto Rican [influencer]?”

Influencers are finding that being proactive is the only way to move the conversation forward.

Max Stein, founder and chief executive of agency Brigade Talent, said some of his clients will ask who else is participating before agreeing to a campaign, in the context of making sure a brand or company aligns on values—not just aesthetic. “It’s important to them that [diversity] is a value of the brand that they choose to partner with,” he said.

However, not all brands are responsive in the way an influencer might want them to be.

“There is sometimes a lack of cultural awareness and cultural sensitivities,” said Jaia Thomas, co-founder of The Presley Group, a management agency promoting diversity within the influencer space.

Thomas, an entertainment lawyer, pointed to the time one of her African American clients was asked to do a post about watermelon. “There’s a long history of racial tropes and stereotypes associated with African-Americans, an affinity for watermelon being one of them,” Thomas said. “It’s important for there to be African-Americans in the room when creating social media campaigns so they can quickly and easily identify these stereotypes and ensure companies steer clear of them.”

So, when will brands wise up? The enthusiasm that comes with a highly-engaged, targeted follower base is a big selling point in today’s noisy marketing field.

“I don’t have a million followers,” said Katie Sturino, the force behind the handle and site The 12-ish Style. “What I do have is an audience that believes in what I’m saying and believe that if I’m showing them something, I like it.”

Sturino’s best-performing content comes from two popular hashtags on her own account, both calling attention to sizing deficits within the industry. She recreates stars’ ensembles in #SupersizetheLook, with photographs of herself in similar outfits, performing 77 percent better than her average posts.

Sturino also started the #MakeMySize hashtag, pairing pictures of herself in garments that are too small with captions asking brands to make a broader range of sizes, performing 65 percent better than her average posts.

Sturino wishes more brands would take the time to find new personalities, and involve those newcomers earlier in the product-development process. “You pay them to wear the clothes, why don’t you pay them for their opinions, too?” she said.

Is it the end of high-heels?
Next Article 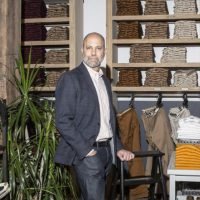