In Italy, the house is asking the court for a maximum 120 days of protection against creditors while it searches for an investor. In the US, it has given up altogether, liquidating its remaining assets in order to pay back its debts.

Later on Monday, workers sat down with the Cavalli team, including global chief executive Gian Giacomo Ferraris, as well as Italian government officials, to better understand their future. In the end, their unions released a statement saying that they still didn’t understand why private equity firm Clessidra Capital Partners, which acquired Cavalli in 2015, had stopped investing in the brand and why management didn’t ensure the company would be supported by Clessidra before taking out loans in order to continue with its turnaround plan.

The confusion and uncertainty surrounding the proceedings were symbolic of the chaos that a challenging turnaround can bring.

Roberto Cavalli came to prominence in the 1970s, earning early notoriety for his patchworked fabrics cut into sexy silhouettes. (Perhaps no other brand is more closely associated with animal prints than Cavalli.) By the time the designer wanted to sell the business in the mid-2010s, he and his family were looking for a sizable valuation, according to market sources.

This, despite the fact that the company began posting annual losses starting in 2014, when, despite sales growth, the company lost €12.2 million mostly due to a bad debt provision.

In 2015, the Cavalli family sold 90 percent of the business to Clessidra, which mostly invests in family-run Italian brands across a host of different categories (it raised €2.5 billion to become the largest Italian private equity firm). On its website, Clessidra’s objectives include developing family businesses and “supporting the ‘Made in Italy’ label in the global market.” The deal valued the brand at €390 million, less than what Mr. Roberto Cavalli had original sought, though he walked away with €230 million and has remained silent through the recent turmoil.

Since acquiring Cavalli, Clessidra has experienced its own fair share of upheaval. In 2016, founder Claudio Sposito passed away and the firm was sold to investment fund Italmobiliare, which brought in a new board. But regardless of what was going on behind the scenes, Clessidra understood that in order to capitalise on Cavalli’s global name recognition, the label would need a serious overhaul. Former Pucci designer Peter Dundas was installed as creative director and given rein — and budget — to not only re-imagine the collections, but also the brand’s stores and other creative assets.

Dundas, who had worked at Cavalli earlier in his career, was considered a good aesthetic fit, but his expensive changes didn’t immediately resonate with customers and the company suffered financially. Sales contracted, particularly in the Russian market, an important region for the brand. In October 2016, a newly installed Ferraris — a turnaround specialist, best known for reviving Versace — reorganised the business as part of a five-year strategic plan, closing its Milan office, cutting 200 jobs (out of nearly 700) and parting ways with Dundas. The company lost €55 million that year.

About six months later, Ferraris finally installed a new design lead: Paul Surridge, a veteran of Z Zegna, Acne Studios and the Raf Simons era at Jil Sander. (He also did time with Calvin Klein in the 1990s and Christopher Bailey at Burberry.) Ferraris and Surridge had worked together at Jil Sander, but the appointment was puzzling to some industry observers, especially given the maximalist leanings of the Cavalli label and consumer appetite for such wares.

Ferraris’s explanation suggested that it may have been Surridge’s corporate experience — his understanding of how business and marketing worked — more than his design credentials that won him the job. “He is a great team leader, and has a great sensibility for digital communication, and he can really interpret and play a role in the future DNA of Roberto Cavalli,” Ferraris said at the time.

Surridge’s collections, while not entirely outside of the Cavalli wheelhouse, lacked the whiz-bang to keep critics truly interested, despite the fact that all seemed to like his designs outside of the Cavalli context. In February 2019, Vogue Runway’s Nicole Phelps put it nicely when she said, “Paul Surridge’s tenure at Roberto Cavalli has been slow to heat up.”

And sales did begin to pick up, if not exponentially. In 2017, the company posted a 3 percent increase in direct revenue. And while it still lost a lot of money that year — €33.7 million — the losses had begun to shrink, indicating to management that the turnaround was underway.

However, in 2018, sales began to drag once again. It was a polarised year for luxury in general, with certain brands, like Gucci and Versace, posting record results, while others suffered. At Roberto Cavalli, plans to revamp the company’s store fleet were stalled. It was estimated that the brand would need €50 million to €100 million more, in order to complete the turnaround.

Ferraris and his team asked Clessidra for more money and were given €5 million, with the promise of another €10 million to come. “The company is making big improvements, but to remain competitive, it needs to invest,” Ferraris told Reuters in October 2018, adding that Clessidra was “fully supporting” that growth.

But by the fall, sales were worse, and in September Clessidra hired banking firm Rothschild to search for potential investors, despite denying this publicly. By the end of the year, there were nine interested buyers, including Phillip Plein and OTB, the group owned by Renzo Rosso.

On March 25, 2019, Surridge quit, announcing the change via Instagram. “I have given much consideration to this decision and reached the conclusion that the mission I have signed on has changed and enters a new direction with a new perspective,” he wrote.

In the documents filed to the Italian government asking for 120 days of bankruptcy protection, Roberto Cavalli listed six potential investors, including Plein and OTB, but also Interparfums Inc. and Marquee Brands, the American company that owns BCBG. The judge will award the company to the investor with the best offer.

Right now, it’s looking like Bluestar Alliance, a US-based brand management company that mostly deals in low-to-mid-priced mall brands like Tahari and Bebe, will be the winner. According to a source within the Roberto Cavalli business, those talks continue to progress and are close to being finalised. In the government filing, it says that Bluestar would invest over €105 million into the company through the acquisition of trademarks.

However, nothing has been communicated regarding Bluestar’s plans for the brand, and whether they will use Cavalli to fully enter the luxury market or take this as an opportunity to reposition the label to something on the lower end of the pricing spectrum remains unknown.

At this point, Clessidra doesn’t have much of a choice but to sell, unless it wants to invest further in the label’s turnaround efforts. But a source familiar with the situation said that the firm simply does not have adequate expertise in the fashion space and became fearful of allocating more funds to something it doesn’t really understand. While private equity firms typically stay out of operations, they often employ partners with an understanding of the category to help support. But the sum of money needed to attempt a successful turnaround made the firm too uncomfortable to keep going, said the source.

In the end, it’s unlikely that Ferraris will be given the opportunity to see his turnaround plan through, regardless of who owns Cavalli. And it seems that the label has missed its window for an epic revival. Italian maximalism has enjoyed quite a run over the past few years, with the rise of Alessandro Michele’s Gucci, the continued popularity of Dolce & Gabbana and the revival of Versace, leading to a 2018 acquisition by Capri Holdings that valued the house at $2.1 billion.

But Roberto Cavalli’s global brand equity is currently nowhere near that of Versace, if it ever was, and now the Italian maximalist moment in the fashion cycle is beginning to die down. 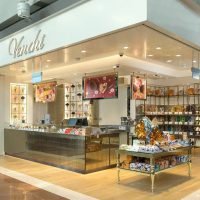 Chinese will soon shop at home