Sa Sa International Holdings Limited announced the unaudited sales update of the Group for the third quarter from 1st October to 31st December 2020.

For the third quarter from 1st October to 31st December 2020, the Group’s retail and wholesale turnover decreased by 36.4% year on year, indicating a narrowing decline. This was mainly due to several factors, including the low comparison base for the Group’s operations in the core market of the Hong Kong SAR in the previous financial year which relieved the pressure for the year-on-year sales performance; a rebound in the number of Mainland Chinese visitors in the Macau SAR after the re-opening of the city’s border; and the growth in both the Group’s e-commerce business and its operations in Mainland China. On a quarter-on-quarter basis, the Group’s overall turnover in the third quarter increased by 34.8% against the second quarter.

For the third quarter, the Group’s retail and wholesale turnover in the Hong Kong and Macau SARs decreased by 48.8% year-on-year, but increased by 35.6% quarter-on-quarter. The continuing improvement in the quarter-on-quarter sales was mainly driven by the market of the Macau SAR, where the local government gradually opened up the city again for travelers from some cities of Mainland China in August 2020, and ultimately for the whole country at the end of September 2020. This caused a robust rebound in the Group’s business with Mainland Chinese customers in terms of both the number of transactions and sales. This, coupled with the Macau SAR government’s effective measures to stimulate local consumption, resulted in a quarter-on-quarter rebound of 122.5% in the Group’s retail sales in the Macau SAR in the third quarter. The year-on-year sales decline also narrowed from 72.9% in the second quarter to 45.0% in the third quarter.

The Group’s retail sales in the Hong Kong SAR were still dominated by the local customers. The number of Mainland Chinese tourists in the city remained low due to the outbreak of the fourth wave of COVID-19 pandemic in November 2020, thus continuing to weigh on the Group’s sales performance.

At Christmas in December, local consumption turned around slightly, boosting the Group’s third-quarter retail sales by 8.2% quarter-on-quarter and narrowing the year-on-year decline to 50.8%.

In the third quarter, the Group’s e-commerce business successfully capitalized on market opportunities at the extended “Double 11” shopping festival in early November 2020 in Mainland China. It also continued to leverage the WeChat mini-programme and other social media to develop its O2O business. As a result, sales at the Group’s e-commerce business surged by 66.5% year-on-year and by 61.8% quarter-on-quarter.

In Mainland China, the Group continued with its planned store expansion and had a net increase of six stores during the period. Despite sporadic COVID-19 outbreak in some cities affecting the performance of the Group’s stores in the vicinities, the Group’s retail business in the country recorded a year-on-year growth of 15.6% in sales for the third quarter, mainly on the back of the expansion of its retail network and the improved sales performance of the same stores by 1.9%.

In Malaysia, the Group’s business was still seriously affected by the COVID-19 pandemic, therefore recording a year-on-year decrease of 38.5% in sales for the third quarter.

Dr Simon Kwok, SBS, JP, Chairman and Chief Executive Officer of the Group, said, “In the coming months, the operating environment in the Hong Kong SAR is expected to remain tough. The Group will continue to rationalize its retail store network to reduce rental expenses and will maintain stringent cost and inventory management to preserve working capital. The Group will also adjust its product mix by introducing more popular products to cater to local customers’ needs. It is anticipated that the scheme for vaccination against COVID-19 will start this year and the Group hopes that the measure will abate the pandemic in good time, allowing the Hong Kong SAR government to gradually relax its compulsory quarantine arrangements for inbound travellers and thus facilitating a recovery in the retail sector.”

The Group adjusted its business strategy by actively developing markets with good potentials, as well as its promising online business. The move would help Sa Sa build a more balanced business and achieve healthy and sustainable development in the future. For the third quarter, the Group’s retail and wholesale turnover in other markets outside the Hong Kong and Macau SARs (including Mainland China, Malaysia and e-commerce) increased by 15.8% year-on-year. 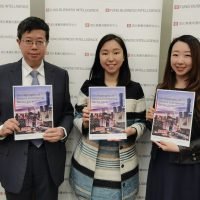