Australian online stores have a higher cart abandonment rate than Asia-Pacific retailers and are the worst in the world, a new report claims.

The Remarketing Report for Q2, 2016 produced by behavioural marketing agency, SaleCycle, found Australian retailers experienced a 76.4 per cent average abandonment rate between April and June 2016, eclipsing the Asia-Pacific average of 76 per cent. This made Australia the worst performing region for the second quarter in a row. In Q1, the rate in Australia was 74.3 per cent.

Globally, abandonment rates stood at 74.52 per cent in Q2, up from 74.32 per cent in Q1. SaleCycle pointed out that more than 98 per cent of traffic will leave a website without converting.

Fashion retail stores recorded the worst stores in particular compared to global counterparts, with a cart abandonment rate of 73.5 per cent during Q2. This compared to 69.8 per cent in Asia-Pacific and 68.8 per cent globally.

However, travel chalked up the highest abandonment overall globally at 80.1 per cent.

Of particular concern is an upward trend in rates in Australia and Asia-Pacific since the last quarterly results, said SaleCycle chief revenue officer for APAC, Chris Brinkworth.

“There is a very long way to go to match the low abandonment rates of mature markets like Europe and North America,” he said.

According to the Q2 figures, abandonment rates sit at 70.9 per cent in Europe and 74 per cent in North America.

Brinkworth presented the figures at the Online Retailer Expo as a case for why remarketing solutions are important to brands today. The report was based on statistics taken from more than 500 global retail, travel and fashion brands. 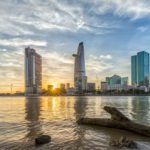