Uniqlo closing down stores in Seoul

Uniqlo is closing down or refurbishing its stores across Seoul, drawing speculation that the Japanese apparel brand is doing so as it has become a main target of Korean consumers’ boycott of Japanese products, according to industry officials.

According to Uniqlo, its store near Jongno 3-ga station will close in October as the building owner and Uniqlo decided not to extend their lease contract. A photo of banners hanging outside the store, showing the building is up for rental, is trending online.

The store has been operating for the past 10 years. When it closes, it will become the first Uniqlo store to close after Korean consumers started boycotting Japanese products in response to Tokyo’s first export restrictions on Seoul on July 4, 2019.

Uniqlo has become the main target of the boycott, after an executive’s remark that the consumer movement “would not last for long.” The brand issued apologies twice but failed to placate the public.

Uniqlo said “the closure of Jongno 3-ga branch has nothing to do with the boycott” and refused to reveal the branch’s sales figures. The real estate agency in charge of the building said Uniqlo demanded a cut in rental fees, which the owner of the building refused.

FRL Korea, operating Uniqlo here, is not revealing its sales data except for its yearly audit report, but Seoul Shinmun reported that Uniqlo’s sales in Korea have declined nearly 30 percent in the first week of last month from a week earlier, citing a credit card company’s tally.

Other Uniqlo branches in Seoul are suffering difficulties as consumers refrain from visiting.

A Uniqlo branch in Yongsan Station was under refurbishment, with all shutters were closed on Sunday. The branch said it is operating as usual, but no customers were seen inside the huge store.

After entering Korea in 2005, Uniqlo has showed sharp growth in the Korean market, having 186 stores across Korea as of August last year. During the period only three stores have been closed. FRL Korea logged more than 1 trillion won in sales since 2015 to 2018.

Along with the Jongno 3-ga branch, a Uniqlo store at AK Plaza shopping mall in Guro-gu, Seoul, will close on Aug. 31, as AK Plaza ends its operation. Its closure was planned before the boycott to start, but Uniqlo is yet to come up with moving plan. 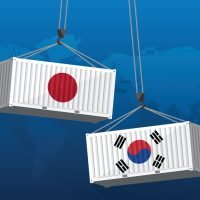