The value of solitary consumers in Korea

According to the Korean government’s 2015 Population and Housing Census, 5.2 million people lived alone last year, and 27.2 percent of all households were single households. People who live alone currently make up the biggest segment of the population, and the number is expected to rise up to 30 percent within 10 years.

The demographic changes have given rise to new consumption patterns in the Korean market. Because those who live alone also eat alone, play alone and shop alone, traditional retail models no longer work.

Single people in their 20s and 30s who lead the new trend do not believe in mass production and mass consumption but demand new products that meet their personal styles. Since they are willing to spend their money only on items that satisfy their taste, new products and services are revolving around their needs and wants. Single people are reshaping the market and evolving into so-called power solos.

One of many new businesses established with power solos in mind is a small-scale house moving service jointly developed by e-Commerce operator Auction and moving company Zim Car. The new service was created after the companies realised that people with small loads still had to pay the same price as bigger households because conventional moving services were made with families in mind.

Multifunctional furniture has also gained popularity. Customised for single people, the pieces are designed to do more than just save space.

Tables for one at restaurants are also very common nowadays. The food industry is coming up with new menus specifically for solo diners and providing closed single-occupancy spaces.

McDonald’s is also quickly jumping on the trend by creating a space for solo visitors in its new branches, which it has already implemented at its Hongdae and Itaewon branches in Seoul.

Liquor businesses have slimmed down their drinks for those who like to drink on their own, and who drink lightly at home. As demand for small-quantity drinks rises, Diageo Korea, the country’s top whisky seller, released a smaller version of its Johnnie Walker series packaged in 200-milliliter (6.7 fluid ounce) bottles early last month.

Competition is now all about getting power solos to open their wallets. Large grocery stores, in an effort to attract consumers away from convenience stores, have also extended sales of home meal replacement products and small packaging of fresh ingredients. REPORT: What do senior citizens spend the most on?
Next Article 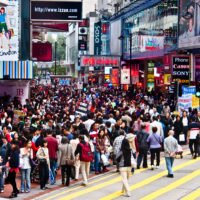