LVMH — the parent company of brands including Louis Vuitton, Dior and CÉLINE — announced plans for its Luxury Ventures initiative in 2017 with the aim of acquiring minority stakes in emerging luxury brands.

The latest brand to get backing from the programme is New York’s Stadium Goods.

As far as streetwear connoisseurs are concerned, New York City’s Stadium Goods is the pinnacle in the sneaker world.

Details on what role LVMH Luxury Ventures will take in the reseller are unclear, although it is rumored that this backing could allow Stadium Goods to expand. The store — which is the location for most Sneaker Shopping episodes — has been open for just over two years and the team behind have previously told WWD about potential plans to move into merch and open a second physical location.

Back in 2017, prior to LVMH’s backing, Stadium Goods raised $4.6 million USD in equity funding and was predicted to gross more than $100 million USD in 2017. 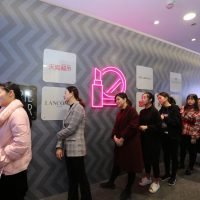