Axel Dumas, Executive Chairman of Hermès, said: “In 2020, we are seeing the affirmation of major strategic commitments with social and environmental responsibility, the digitalisation of uses and lifestyles, as well as positive market dynamics in Asia. Taking into account these profound and lasting changes allows us today to remain confident despite a still uncertain future. Our good performance  nables us to continue to invest and to create jobs. I would like to thank all the teams at Hermès who work daily to keep the house growing.”

At the end of September 2020, sales in the group’s stores were down 11% at constant exchange rates, with a third quarter up 12%. The acceleration of online sales is strengthening, with no rupture in trends, with a sharp increase in traffic and conversion rates. Wholesale activities are down 35% over nine months, mainly
penalised by travel retail.

Asia excluding Japan (+4%) pursued its very favourable dynamic, driven by an excellent third quarter up 29%. It benefitted from the remarkable performance of Mainland China, Korea, Australia and Thailand. The activity in Hong Kong and Singapore improved. Online sales are growing strongly and benefit from the new digital platform, deployed this year in Hong Kong, Macao and Korea. In China, the Dalian store was expanded and renovated in September.

Japan (-11%), after the unfavourable impact of store closings in the spring, saw a strong upturn in the third quarter up by 11%. It confirmed its momentum thanks to the loyalty of local customers, despite a high comparison basis due to anticipated purchasing expectations linked to the VAT hike last year.

The Sendai store was renovated in September, after the Marunouchi store in Tokyo in August. A fourth store opened in the Shinsaibashi district in Osaka.

America (-29%) is slightly down in the third quarter due to the store closures in Hawaii since August. The Denver store in Colorado reopened in August at a new location.

Europe excluding France (-27%) and France (-33%) are still suffering from the drop in tourist flows, partly offset by local customers. A new store was opened in September in Vremena Goda, Hermès’ third Moscow address, twenty years after the first store opened on Stoleshnikov Lane.

The Leather Goods and Saddlery business line (-13%), improved strongly in the third quarter, which renewed with a +8% growth as a result of the resumption of deliveries and sustained demand. The increase in production capacities continues, with the opening of the sites in Guyenne (Gironde) and Montereau (Seine-et Marne) in 2021, consolidation of our capacities in Normandy with the Louviers site (Eure) in 2022, and the project in Ardennes in 2023. A second production site in Auvergne has been announced and will become the 22nd Leather Goods and Saddler workshop. They are all located in France where Hermès continues to consolidate its local presence.

The Group’s other business lines also benefitted from the good resumption of business in the different geographical areas. Ready-to-Wear and Accessories (-16%) showed a strong turnaround in the third quarter at +7%. The Women’s Spring-Summer 2021 fashion show, presented at the Paris Tennis Club in October, met great success, after that of the men’s collection early in July. Silk and Textiles (-32%) was penalised by a high comparison basis in the third quarter and by the lower sales in travel retail.

Perfumes, also penalized by the impact of travel retail activity, were down 22%. After the very successful launch of the first collection of lipsticks in early February, the Beauty line continued to perform well.

Watches (-8%) achieved a very good third quarter, up 13%. The Other Hermès business lines (+ 12%) are highly growing with a 42% increase in the 3rd quarter, thanks to Jewellery and Home universe. The new Lignes sensibles high jewellery collection was unveiled at the end of September.

At the end of September, currency fluctuations represented an unfavourable impact of €22 million on revenue.

Over the first nine months, Hermès International redeemed 168,780 shares for €123 million, excluding transactions completed within the framework of the liquidity contract.

For 2020, the impacts of the Covid-19 epidemic remain difficult to assess, as the scale, duration and geographic extent of the crisis evolve every day. Our highly integrated craftsmanship model and balanced distribution network, as well as the appeal of our collections and our customers’ loyalty give us confidence in the future and support our resumption of operations. The Group remains highly involved and active by regularly assessing the situation and adapting measures to those taken by health and public authorities.

Thanks to its unique business model, Hermès is pursuing its long-term development strategy based on creativity, control over know-how and singular communication.

With pride in its craftsmanship model, in 2020 Hermès pays tribute to the extraordinary tool that is the hand, as well as to the ingenuity that drives every one of the house’s craftsmen and women. For it is this combination that characterises the innovative spirit of Hermès, its commitment to the Saddler’s spirit.

In the medium term, despite growing economic, geopolitical and monetary uncertainties around the world, the Group confirms an ambitious goal for revenue growth at constant exchange rates. 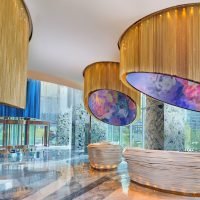 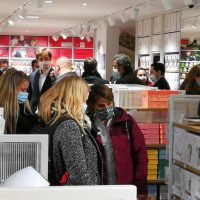