Fosun International has purchased Paris fashion brand Lanvin for more than 100 million euros, two sources close to the matter have revealed to the French fashion press.

Sources revealed to FashionNetwork.com late Friday that the Chinese group would acquire France’s oldest fashion maison, beating out Qatar’s Mayhoola, winning the auction-style fight for Lanvin that has been ongoing for some weeks.

“Fosun has won Lanvin and an announcement should be made this week,” one of the sources said.

The deal will see Fosun International invest more than 100 million euros in Lanvin with the company issuing new shares to its new controlling shareholder.

“It is a surprising decision,” one of the sources said. “This is a complex affair, many will be watching how Fosun handles it.”

It’s a blow to Mayhoola’s portfolio also. The owner of Valentino and Balmain has been eyeing Lanvin for a decade now.

Sales at Lanvin have more than halved in the past three years to less than 100 million euros as the French fashion house struggled to reinvent itself under two successive designers in a desperate attempt to find the right strategy after sacking its star designer Alber Elbaz in 2015.

It was reported in September last year that the Chinese investor was also in the running to purchase Swiss luxury brand Bally. However, it was announced this week that fellow Asian investor Shangdong Ruyi, the Chinese group that also controls SMCP and Aquascutum, has acquired Bally.

Lanvin, Fosun International and Mayhoola were unavailable to make a comment on the news. Shiseido's results for 2017
Next Article 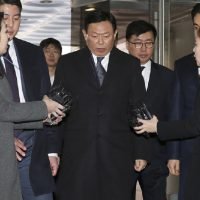