The United States Bankruptcy Court for the Eastern District of Virginia has approved the adequacy of the company’s Disclosure Statement filed in connection with the solicitation of votes on Ascena’s Plan of Reorganization and the procedures to be used in connection with the solicitation of votes on the Plan. With this approval, the company will commence solicitation of votes from its creditors for approval of the Plan, which includes an amended Restructuring Support Agreement that now has the support of approximately 95% of Ascena’s secured term lenders and is expected to significantly reduce Ascena’s debt by approximately $1 billion. The hearing to consider confirmation of the Plan is currently scheduled to commence on 23rd October, 2020.

The company has also received approval from the Court on a final basis for Ascena’s debtor-in-possession (“DIP”) financing. The company’s DIP financing comprises a $400 million ABL facility and an approximately $312 million term loan, which includes $150 million in new money, and will convert to exit financing upon the company’s emergence from the Chapter 11 process.

Upon final approval of the Plan, and with approved DIP and exit financing, the company is on track to emerge from the Chapter 11 process with a stronger balance sheet and operating structure.

Gary Muto, Chief Executive Officer of Ascena, stated, “We are extremely pleased to have reached such significant milestones in our Court-supervised restructuring process. The approval of the Disclosure Statement and our financing commitments combined with the overwhelming support received from our lenders and the early agreement reached with the Unsecured Creditors Committee regarding our proposed debt restructuring represent noteworthy progress toward emerging from Chapter 11 and positioning ascena for long-term success. We are in the final stages of implementing our store closure plans across brands, which is expected to reduce our overall footprint to approximately 1,300 locations, and are continuing rent discussions with our landlord partners for our go-forward stores. In addition, as part of our ongoing corporate expense reduction plan, we have now exited and consolidated our corporate offices. Collectively, we believe these actions will enable us to strategically invest in the business and generate sustainable, profitable growth once we emerge from the Chapter 11 process. I would like to thank our associates for all of their efforts in recent months as we have not only executed on our restructuring plan but have also addressed the challenges of meeting our customers’ needs through the pandemic. All that we have achieved would not have been possible without our talented team.”

Following a comprehensive sales process and auction conducted under Section 363 of the U.S. Bankruptcy Code, Ascena announced that FullBeauty Brands Operations, LLC will acquire Catherines’ intellectual property assets for a base purchase price of $40.8 million and potential upward adjustment for certain inventory.

The company continues to operate its Ann Taylor, LOFT, Lane Bryant, Justice and Lou & Grey brands as normal through a reduced number of retail stores and online. 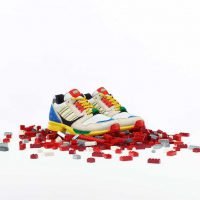 Adidas Originals and Lego collaborate for ZX8000 silhouette
Next Article