Terms of the takeover deal were not disclosed. The deal marks Manolo Blahnik’s first-ever supplier purchase and comes on the back of Chanel’s stake purchase in Tuscan
tannery Conceria Samanta in early July.

“Calzaturificio Re Marcello is synonymous with craftsmanship of exceptional quality in our industry and we are delighted to have been able to bring such a valued partner into the family,” said Manolo Blahnik CEO, Kristina Blahnik.

“This acquisition will be our first atelier and manufacturing facility, creating greater creative and operational flexibility for the future of our business,” she continued.

The Spanish-born designer Manolo Blahnik told media that the factory acquisition will see the Italian firm’s “77 highly-skilled craftsmen” join the Manolo Blahnik group, which “will strengthen [our] vision for developing artisanal talent and nurture the art of shoe-making for future generations.”

Founded in 1938 by the Re family, the Calzaturificio Re Marcello factory is in Vigevano, Pavia. It has been making shoes for Manolo Blahnik for close to thirty years kicking off
operational connections in 1990.

With the deal, Calzaturificio Re Marcello’s current management team — made up of scion, Bruno Re, and Giuse Galazzi — will stay on “for the foreseeable future,” working alongside Blahnik’s management team “to ensure continuity,” added the designer.

At the time of the launch, the luxury shoe brand also debuted its men’s line for the first time in Japan. 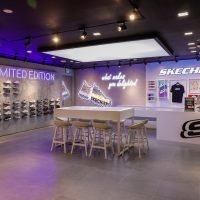