“Our first quarter results underscore the strength of the Levi’s brand and the efficacy of our strategies to diversify our business, both of which will be crucial to coming out of the current crisis stronger than ever,” said Chip Bergh, president and chief executive officer of Levi Strauss & Co.

Net revenues grew five percent on a reported basis, and six percent on a constant-currency basis excluding $11 million in unfavorable currency effects. Net revenues growth was partially offset by an estimated approximate $20 million adverse impact of store closures and reduced traffic during the last six weeks of the first quarter resulting from the outbreak of COVID-19 in China.

The remainder of the direct to-consumer growth was due to expansion and performance of the retail network and e-commerce growth. Net revenues from the company’s wholesale business grew one percent on a constant-currency basis, reflecting growth in Europe and Asia partially offset by a decline in the Americas.

Gross profit of $839 million rose seven percent on a reported basis from $783 million in the same quarter in the prior year. Gross margin was 55.7 percent of net revenues, up 110 basis-points compared with 54.6 percent in the same quarter of 2019, primarily reflecting the benefit of price increases, higher direct-to consumer and international sales, including the benefit of Black Friday falling in the 2020 period, and a reduction in sales to the off-price channel. 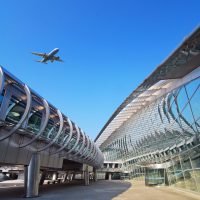 Korean aviation industry at risk of chain bankruptcy
Next Article