KKR and Rakuten to acquire majority stakes in Seiyu from Walmart

Walmart Inc., KKR & Co. Inc. and Rakuten, Inc., announced the signing of definitive agreements under which KKR will purchase a majority stake, and a new Rakuten subsidiary will purchase a minority stake in Seiyu GK in a deal valuing the business at US$1.6 billion.

Under the terms of the agreements, KKR will acquire a 65% stake in Seiyu, and Rakuten will acquire a 20% stake, through a newly created subsidiary focused on retailer digital transformation. Walmart will retain a 15% stake in Seiyu. The new ownership structure enables Seiyu to take advantage of KKR, Rakuten and Walmart’s combined retail expertise and innovation as a standalone company and accelerate its digital transformation to further benefit both Seiyu’s customers and business partners.

KKR, Rakuten and Walmart are committed to supporting Seiyu’s growth, and this unique ownership structure reflects a shared belief in Seiyu’s long-term strategy in Japan. Last year, Seiyu launched an ambitious strategy to accelerate growth through a more concerted focus on providing value, fresh produce and digital convenience to customers. The Company has already met or exceeded operational and financial goals across key areas, including market share, customer satisfaction, associate engagement and financial performance. Together, the three companies look to bring complementary strengths to build on Seiyu’s momentum and support its efforts to become Japan’s leading omnichannel retailer.

KKR and Rakuten’s investment in Seiyu is further intended to deliver a range of substantial benefits over time for the Company’s customer base, including: Accelerated investment in digital channels to facilitate app-based shopping, payment and delivery services; Introduction of new options for cashless payment; Improved service experience across both online and offline channels; and Enhanced product offering at everyday low prices to stay ahead of its customers’ shopping needs.

KKR will bring its deep expertise in the Japanese market to Seiyu, in addition to its decades-long track record of investing in the subsidiaries of large corporations and empowering them to unlock their potential as successful, independent companies. KKR will further leverage its sector and operational expertise to enhance Seiyu’s retail transformation efforts and will make available its network of advisors, portfolio companies and specialists to create value.

The new ownership structure builds on previously established collaborations between Rakuten and Walmart, including the popular Rakuten Seiyu Netsuper online grocery delivery service and Rakuten Group’s partnership with Walmart that includes ebook service support in the United States. Rakuten will further accelerate digital transformation of Seiyu and other Japanese retailers through its new subsidiary Rakuten DX Solution, leveraging its 100M+ membership base and technology.

Seiyu will continue to have access to Walmart’s global retail best practices, sourcing network and scale to maintain the price leadership and value it provides to customers.

Seiyu CEO Lionel Desclee will continue to lead the business through a transition period, after which he will take on a new role within Walmart. A new Board of Directors comprised of representatives from KKR, Rakuten and Walmart will be formed to focus decision making locally and plans to appoint a new CEO following the close of the transaction.

Judith McKenna, President and CEO of Walmart International, commented, “This past year has been one of the most extraordinary in Seiyu’s rich 57-year history. Our associates have been exceptional, adapting brilliantly to serve customers at a time when they needed it most and outperforming against an ambitious transformation plan. We have been proud investors in this business over the past 18 years, and we are excited about its future under the new ownership structure. Today’s announcement is important because its focus is on bringing together the right partners in the right structure to build the strongest possible local business. We look forward to supporting Seiyu’s growth and success, alongside KKR and Rakuten, as a minority investor.”

Hiro Hirano, Co-Head of Asia Pacific Private Equity and CEO of Japan at KKR, said, “KKR is pleased to invest in the success of Seiyu given the important role it plays in the lives of customers across the country. We are also excited by the prospect of working with Seiyu’s associates, who have dedicated themselves to supporting the business in spite of this year’s unprecedented challenges. We will focus on working closely with Seiyu’s management team and associates and leveraging the expertise of Rakuten and Walmart to enhance the customer experience, meet their ever-changing needs, and make shopping more accessible through digitalization. This investment is a true milestone for KKR in Japan and reinforces our commitment to the market as well as our continuing efforts to champion the long-term success of local businesses.”

Kazunori Takeda, Group Executive Vice President and President of Commerce Company, Rakuten, Inc., said “By building on our successful partnership on Rakuten Seiyu Netsuper and our deep experience in online retail and data-based marketing, we look forward to accelerating digital transformation of Seiyu brick and mortar retail and further merging the best of offline and online retail to offer Seiyu customers the best possible OMO1 customer experience. The planned establishment of Rakuten DX Solution will also allow us to offer digital solutions optimized to transform retail at Seiyu and in new future partnerships with retailers across Japan.”

KKR is making its investment from its Asia private equity fund. The transaction is subject to regulatory approvals and is expected to close in the first quarter of 2021. 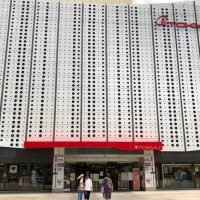