“In a tough environment, Kering achieved substantial revenue recovery in the third quarter. The creativity of each of our Houses and the agility of our organization led to a sharp rebound in sales, nearly matching the level of the 2019 third quarter. We are pursuing with determination the implementation of our strategic initiatives – the internalization of our e-commerce activities reached other key milestones and we continue bolstering our growth platforms. With a solid financial situation, further reinforced recently, we keep investing in our Houses, to enhance their exclusivity, and strengthening our positions. Against a backdrop that remains uncertain, and despite limited visibility, we are well prepared and confident in our ability to deliver good performances over time,” said François-Henri Pinault, Chairman and Chief Executive Officer.

It is reported Kering had a strong sequential improvement in third-quarter comparable revenue, nearly unchanged from the third quarter of 2019 despite the Covid-19 crisis. Revenue generated by the Luxury Houses’ directly operated stores back to the third-quarter 2019 level.

Kering reaped the benefits of sharp growth in certain regions, notably North America (up 44.1%), driven by a rebound in local demand, and Asia-Pacific (up 18.5%), fueled by excellent momentum in Mainland China. Sales performances in Western Europe (down 41.0%) and Japan (down 22.8%) were still severely hampered by the halt in tourism.
o Online sales continued their outstanding growth trajectory, up 101.9% in the third quarter, led by North America and Asia-Pacific. In the first nine months of the year, e-commerce accounted for 12.5% of Group retail sales.

Wholesale revenue down 5.2% on a comparable basis, reflecting both the sharp slowdown in travel retail and the Group’s strategy towards increasingly exclusive distribution.

Ongoing Group strategic investments supporting the development of its Houses, notably continuing progress in the internalization of their e-commerce activities.

Gucci’s revenue picked up sharply in the third quarter of 2020 compared with the prior quarter. At US$2,470.83  million, revenue was down 12.1% as reported and 8.9% on a comparable basis. Retail sales were down 4.0% on a comparable basis. Gucci had an excellent quarter in North America (up 43.7%) and delivered a solid performance in Asia Pacific (up 10.6%), despite high bases of comparison in recent years. The lack of tourists weighed on sales during the period, especially in Western Europe (down 47.3%) and Japan (down 25.9%), though tighter relationships with local customers in Europe are paying off. Online sales grew sharply worldwide, accounting for 12.6% of total retail sales.

Wholesale revenue contracted 31.6%, in line with the House’s ongoing strategy of enhancing the exclusivity of its distribution by reducing the number of third-party retailers.

Yves Saint Laurent returned to growth in the third quarter in both its directly operated stores and its wholesale channel. Total revenue of US$604.39 million was up 0.8% year on year as reported and 3.9% on a comparable basis. Retail sales rose 5.8% on a comparable basis. In addition to its strong appeal among local customers in Europe and North America, Yves Saint Laurent’s market penetration is increasing in the Asia-Pacific region, where awareness of the brand is rising together with the expansion of its store network. Online sales more than doubled year on year, notably reflecting the successful launch of the House’s China e commerce site in June.

Buoyed by the success of the Fall 2020 collection, wholesale revenue also rose, up 3.4%.

Bottega Veneta’s third-quarter performance confirmed the resounding success of its collections – both with the House’s longstanding clientele and with new customers. Revenue totaled US$393.5 million, up 17.0% as reported and 20.7% on a comparable basis. Sales generated in directly operated stores rose 12.1% on top of high bases of comparison, spurred by an excellent performance in Asia-Pacific and solid growth in North America. Online sales achieved triple-digit growth.

Alexander McQueen and Balenciaga delivered double-digit growth in both retail and wholesale channels. These two Houses are benefiting from the expansion of their directly operated store networks in high-growth markets – especially Asia-Pacific and North America – and progress in their online sales is also accelerating.

Despite their significant exposure to Western Europe and Japan, the Jewelry Houses held up well, buoyed by Boucheron’s growth in Asia-Pacific and Qeelin’s growing success. The Watch Manufactures, hit hard by the crisis, are continuing to focus on prime distribution.

Revenue for the “Corporate and other” segment rose 10.1% as reported and 13.8% on a comparable basis, led by Kering Eyewear’s solid performance during the quarter. 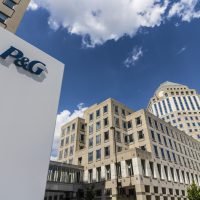