People born in the year 2000 will turn 19 this year, entering university or finding jobs in a society struggling with slowing economic growth and a rapidly declining population.

But as Korea adapts to a difficult economic environment, how will this new generation that prioritizes personal experiences and online communities fit in?

David Stillman, an expert and author on Generation Z, has named it as the first real global age group that has interacted with the world through mobile devices throughout their lives. He also said they are used to fierce competition after experiencing the realities of the global recession in the late 2000s.

Korea’s Generation Z is unique in that it is the first to experience both low economic growth and a declining population.

Economic growth has experienced a similar trajectory. While Korea recorded 8.9 percent in gross domestic product growth rate in 2000, the figure for 2018 was at 2.7 percent.

The changing demographic toward smaller families, the shifting economic landscape and the availability of personalized technology have led Generation Z to place emphasis on personal standards and develop spending habits for products personalized for them.

“They have a strong sense of individuality compared to past generations,” said Oh Jun-beom, a researcher at Hyundai Research Institute. “It is highly likely that they will become consumers with a lot of different needs.”

Generation Z was raised with access to technology that connected them to the world. “If millennials are ‘digital natives’ of computers, Generation Z are ‘mobile natives’ used to smartphones,” said Hong Joo-eun, CEO of Ginger T Project, a consulting company specializing on non-profits.

The technology allowed Generation Z to become more easily exposed to new and foreign cultures compared to previous generations. “Millennials were exposed to American TV shows by their experiences studying abroad,” said Hong. “Generation Z can watch YouTube videos from wherever they are.”

According to the IBM Institute for Business Value’s survey on Generation Z, 74 percent of respondents said they spend their free time online, compared to 44 percent who said they spend time with their friends.

The generation’s most preferred mobile device was the smartphone, at 75 percent. The preference for smartphones has led to a tendency to focus on personalized experiences.

“Computers, largely used by previous generations, have a strong sense of co-ownership,” explained Shin Cheol-ho, CEO of mobile start-up OGQ. “On the other hand, smartphones have a sense of individualism.”

Korea’s Generation Z is different from Korea’s Generation Y, known for following trends en masse. Millennials played a leading role in the bench coat craze during their student years, with students wearing identical jackets as if they were uniforms advertised by famous celebrities.

The new generation is different in that they are more accustomed to social media platforms and trust YouTube stars for product recommendations rather than advertisements by celebrities.

With the rise of social media and content, the new generation also places importance on visual images.

In a report by Park Hye-sook, a professor of design at Pyeongtaek University, the average concentration period of the new generation is eight seconds. It is more familiar with using emoticons and images rather than text. The study emphasized incorporating images in marketing to target young consumers.

Despite the slowing economy, Generation Z was brought up in an environment where their parents and grandparents went all out to invest in their upbringing. As they grew older, child-related industries in Korea developed a premium strategy to suit new demands.

There are beauty parlors and skin care establishments that exclusively cater to children in the posh neighborhoods of Gangnam District in southern Seoul.

Expensive foreign children’s brands such as Rachel Riley, used by the British royal family, and Bonpoint, a premium French brand, have been widely popular in Korea.

Meanwhile, local brands that have focused on mid-to-low range products have struggled.

Agabang & Company, Korea’s first baby brand, was once the market leader, but its sales have decreased dramatically since the 2000s.

“As more children are well cared for, almost like princes or princesses, sales for premium brands are on the rise each year,” explained Son Moon-guk, the head of the products division at Shinsegae Department Store.

“There is a trend to emphasize distinction through premium or specialized services for younger children,” explained Hong. “The private education market will continue to grow separate from the government’s efforts to expand early childhood public education programs.”

Through their upbringing, the Generation Z displays a strong sense of self-awareness and individualism, which reflects in their spending preferences.

“Teenagers these days change their smartphone background image if someone else uses the same image, even if they really like it,” explained one mobile start-up executive.

Living in the now

Generation Z is different from previous generations as they place more importance on the present or the near future rather than long-term goals.

Experts say the tendency to place importance on the present is based on the overall economic environment.

“The 1997 Asian Financial Crisis changed the lives of Generation X [the parents of Generation Z],” said Shin Kwan-yeong, a professor of sociology at Chung-Ang University. “Generation Z seems to have come to the conclusion that it is meaningless to plan or save up for an uncertain future.”

With the explosion of mobile technology and social media, Generation Z is familiar with the variety of apps and services that require effort to manage. This has led to a tendency to be strict in time management and prioritizing certain activities over others for the sake of efficiency.

This trend is most noticeable in how the Generation Z does not spend much time on meals yet avoids fast food. Companies have picked up on the trend and Korea Yakult launched its meal kit business in 2017, targeting the younger generation with small, packaged dishes that were popular when they were children.

Airbnb launched its trip service, where the host provides local tours for visitors in 2016 and has found popularity among younger users.

“It was neither a commercial nor generic trip,” said Kim Ye-seul, who used the service for a trip to Jeju in December. “It was very unique.”

The retail industry is currently offering products that target Generation Z. Although they do not yet have purchasing power, younger consumers have a strong influence on their parents’ purchases based on their ability to get access to information on a wide variety of products for the best price.

In December last year, the Ansan branch of the Lotte Department Store made a drastic change to its layout, placing a bar selling alcohol and drinks on the first floor instead of the usual cosmetics stores. The establishment installed a Muji store, which specializes in households goods with a no-logo policy, on the same floor and is popular with younger shoppers.

“Retail companies can no longer ignore the preference of Generation Z on lifestyle and real experiences,” said Lee Seung-yun, a business professor at Konkuk University. 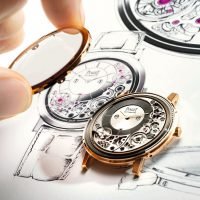 EXCLUSIVE INTERVIEW with Piaget : where heritage meets innovation
Next Article