In Japan, department stores pin hopes on ‘around 50’ generation

Major department stores are focusing on fashion for customers who are around 50 years old, developing their own brands in the hope of boosting sluggish clothing sales.

Customers in this age group are thought to be fashion-conscious because they experienced the affluence of the bubble economy while in their 20s. People in this demographic have money to spare because their children are now grown up.

Forty percent of those products were planned, developed and produced by Takashimaya in cooperation with makers. The operator, which opened Season Style Lab floors at four more major outlets as of Wednesday, aims to achieve annual sales of ¥1 billion ($9.7 million U.S.) , up 30 percent compared to the amounts these floors used to sell.

Many items at Season Style Lab are priced at about ¥20,000, about 30 percent cheaper than equivalent products at shops of major apparel makers. For its signature sales floors, Takashimaya offers an array of products tailored to the age group, such as pants that conceal body shape.

“We meet the needs [of women around 50] so they can enjoy fashion,” said Yukiko Shimameguri, director of the department store’s merchandising headquarters.

Sogo & Seibu Co. has developed a private brand – Limited Edition Avecmode – for couples in their 50s. The brand is available at seven of its outlets in major urban areas. The department store focuses on couples in this demographic because they have more time to spend together since their children are grown up. The designs allow couples to enjoy similar materials, patterns and colors.

J. Front Retailing Co., a holding company for department store chains, will roll out its Kcarat brand targeting customers in their 40s and 50s by the end of September. The brand, which will be available at six outlets run by Daimaru Matsuzakaya Department Stores Co., was jointly developed with Senshukai Co., a major mail-order company in which J. Front Retailing has invested.

Department store operators can enjoy better profit-earning ratios from private-brand products – like those developed by Takashimaya and Sogo & Seibu – because they can save costs due to fewer dealers being involved. The stores are keen to emerge from their difficulties by targeting people aged around 50 who are particular about quality and price. 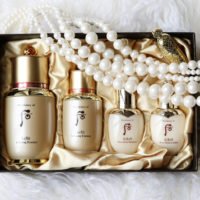 Korea’s Whoo to make debut in Cannes
Next Article