The campaign is the brand’s first for the February 5 festival in celebration of “family traditions and togetherness during the festive period,” according to an online release on Burberry’s website.

But the advertising images, in the style of a family portrait, have been criticized as being “creepy,” by people on social media.

Burberry‘s New Year campaign stars Chinese actresses Zhao Wei and Zhou Dongyu, showing them with models of different ages, against a grey backdrop. None of the characters is smiling. “Inspired by classic portraiture, the campaign is reimagined in an informal urban environment, juxtaposing the old and the new, the traditional and the contemporary,” the company’s online release stated.

Another suggested that the pictures were reminiscent of China’s economy, posting “Unhappy family, unhappy Burberry. No one is looking normal.” Indeed, the automotive and property markets are suffering in the country, and Apple’s Chief Executive Tim Cook last week blamed weak revenue guidance on slow growth in China.

Burberry is in the middle of a repositioning as a “higher” luxury label, meaning it can charge more for its clothes and accessories, a move initiated by Chief Executive Marco Gobbetti after he took on the role in 2017. It is also aiming for £100 million ($127.6 million) in savings between 2016 and 2019, which it says it is on track to achieve.

The company has 200 stores and concessions in the Asia-Pacific region and its revenue was up 5 percent in the area, over its 2018 financial year, according to a December online statement. This compares to a 1 percent decline in the Americas and a 1 percent gain in EMEA and India.

This is not the first time a Western luxury brand has caused controversy in China. In November, Dolce & Gabbana canceled a fashion show in Shanghai after a video series called “Eating With Chopsticks” was called racist by some internet users.

According to Burberry’s press release about the campaign, “it draws on the concept of families reuniting for the most important holiday of the year, and represents a sense of belonging, but in a very fresh way”. 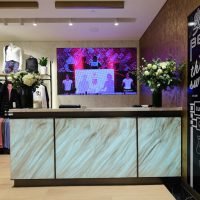