UK department store Harrods has posted its eighth consecutive year of record sales and profits, as the luxury retailer attracted a heavy amount of tourist shoppers in the last 12 months, especially visitors from China.

The Knightsbridge, London-based store broke through £2 billion in annual sales for the first time for the year-period ending January, despite highly competitive market conditions.

According to The Times, Harrods reported pre-tax profit had risen from £168 million to £233.2 million while its operating profit has increased from £178 million to £253.3 million as “a result of the significant boost in trade after the weakening of the British currency.”

The Qatar Holding-owned landmark is a retail flame for those cashed-up moths that fly in from Asia and the Middle East.

A report from Deloitte in December found that the UK is now the most affordable luxury market in the world, due to exchange rates working in its favour post-Brexit.

As a result, London is seeing more tourists, coupled with the belief it is a safer destination despite recent terrorism attacks.

“Every year seems to be a record year for us at the moment and long may it last,” said CFO John Edgar. “This year we have grown our like-for-like operating and net profit even more than last year by 24% and 19% respectively. I think that is stunning and in my experience to have a store and a business that is as old as this one and yet still get the growth that it does, from one location primarily, is phenomenal,” he continued.

Qatari Holding bought Harrods in 2010. In the last seven years, the investment firm has invested over £450 million with the opening of a wellness clinic, a dedicated retail section for super-luxury fashion collections and building renovations and upgrades.

More than £55 million was spent in the last fiscal year, with more expenditure expected for the current financial year.

Harrods plans to enlarge of its jewellery section and beauty hall, bring together its men’s and sportswear for closer proximity while shopping, and add to its interiors offering. 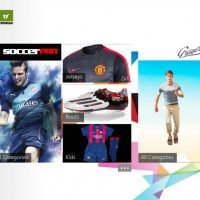