Marco Gobbetti, Chief Executive Officer of Burberry announced: “This was a good quarter in our multi-year journey to transform Burberry. We increased the availability of products designed by Riccardo, while continuing to shift consumer perceptions of our brand and align our network to our new creative vision. The consumer response was very promising, delivering strong growth in our new collections. We are on track with our plans and we confirm our outlook for FY 2020.”

There was an excellent consumer response to Riccardo Tisci’s product with new collections delivering strong double-digit percentage growth compared to prior year equivalent collections, in line with our expectations.

The proportion of new product increased to around 50% of our offer in mainline stores by the end of the quarter. The brand has grown its business with improved social media traction, press coverage and organic endorsement from influencers.

Men’s and women’s apparel grew by a double-digit percentage, while accessories declined with the benefit from new styles more than offset by the softer performance of lines from previous collections.

FY 2020 is the second year of multi-year plan to transform Burberry. Burberry’s focus in this first phase is on investing to re-energise its brand and aligning distribution to its new positioning, while creating the foundations of a new product offering.

Against this backdrop, Burberry made good progress in the quarter as it increased the availability of products designed by Riccardo Tisci and continued to evolve its retail and wholesale network.

This was the first quarter where the proportion of new product in Burberry stores was meaningful and the response from consumers was very promising. New collections delivered strong double-digit percentage growth, with all regions ahead of prior year equivalent collections.

Consumers responded positively to the new aesthetic and house codes. The response to the new product was also strong in wholesale, where many of Burberry’s luxury doors saw significantly higher sell through compared to previous collections.

To celebrate its monogram capsule, Burberry launched a significant programme of high-profile activations across retail and wholesale, which generated total reach of 120 million consumers globally.

More widely, on social media Burberry’s traction across Instagram and WeChat continued to improve, with growth in the number of followers and double-digit gains in the engagement rate per post compared to the previous quarter.

In addition, key influencers continued to organically endorse Burberry product and editorial press coverage remained strong. In distribution, as planned, Burberry accelerated its alignment programme. In retail, 23 stores incorporated its new creative vision by the end of the quarter and a cumulative nine of the 38 smaller, non-strategic stores previously announced for rationalisation have now been closed.

Meanwhile, in wholesale, Burberry continued to rationalise space in non-luxury US doors. Finally, it continued to innovate with sustainable raw materials, introducing ECONYL, a yarn created from nylon waste in landfill and ocean plastics into men’s and women’s outerwear. ECONYL can also be recycled and recreated into new products.

In June, the proportion of new product was around 50% of the mainline offer compared to 10-15% in March. This underpinned the improvement in comparable store sales growth to +4%.

In terms of comparable store sales growth, mainline is expected to accelerate as the new product builds through the year. However, Burberry anticipates this will be partially offset in the second half of the year by reduced markdown inventory compared to the prior year. 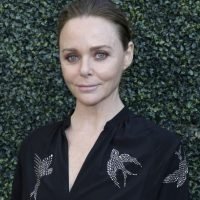