Many customers associate pop-ups with an experience different from what they expect from conventional brick-and-mortar stores.

“If this were a regular shop, I wouldn’t have stepped inside,” said Nam Yong-il, who visited LG Uplus’ fifth-generation-themed pop-up in Gangnam, Seoul, earlier this week. “But since it’s a pop-up, I thought it might have something cool.”

Set up on the first and second floors of a building near Gangnam Station, the space offers visitors a hands-on experience on the latest cellular network technology.

“The VR experience powered by the 5G technology was impressive. It made me curious about life when that technology is more commonplace,” Nam added.

Just like other flash retail events, LG Uplus’ shop, which draws tens of hundreds of visitors daily, will disappear at the end of next month.

In Itaewon, an inner-city hangout spot, Louis Vuitton recently held a pop-up experiment that thrilled local fashionistas: An all-bag affair at an artsy music hub consisting of thousands of vinyl LPs and 16,000 CDs — the Vinyl and Plastic.

“I knew this was something definitely worth checking out. So I came,” said Shin Yun-hui who visited it last weekend, days before its closure Wednesday after a two-week operation.

The luxury brand’s pop-up featured the entire collection of its Twist bags with the LV logo twist lock, first introduced in 2014.

The short life span of pop-ups — as short as less than a week — is its key characteristic and what makes it appealing to marketers and consumers.

As they are temporary, pop-ups are used as a low-cost, low-commitment way for brands to try out something new, like introducing a pilot product line that targets a new audience, marketing experts say.

They expect more brands — both small and big — and even individual merchants, to use pop-ups to generate buzz and reach new audiences.

According to US-based PopUp Republic, the pop-up industry in the US had grown to approximately US$10 billion in sales as of 2017. 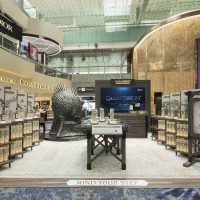 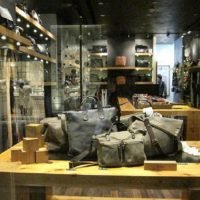 Canada's M0851 is expanding in Japan