Alibaba, the pioneer of Chinese e-commerce, is reportedly embarking on its first brick-and-mortar mall.

The five-floor center, to be called “More Mall,” is being built near Alibaba‘s headquarters in the eastern Chinese city of Hangzhou, according to Caixin, a Beijing-based financial news group.

Caixin first reported on the news Tuesday 2 September in the morning.

A representative from Alibaba did not immediately respond to CNBC’s request for comment.

The mall is being constructed on a 40,000-square-meter plot of land, Caixin said, and is scheduled to open in April 2018. Construction crews are believed to be finishing the building’s interior on time.

Meantime, the internet giant has been making other moves in China to break into physical retailing.

Alibaba CEO Jack Ma has said he wants to blend the online world with that of offline. One example is the company rolling out its own grocery concept, known as Hema.

It will also have a Hema supermarket store, the publication said. Hema was first launched in 2015 as an app that allows shoppers to order groceries via a cellphone, using Alibaba’s Alipay to ring up purchases.

In the U.S., Amazon is also encroaching on the physical world of retail — especially hurting grocery stores, after it bought Whole Foods.

There are no reports of Amazon constructing its own mall, though. At least for now. 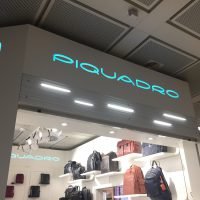 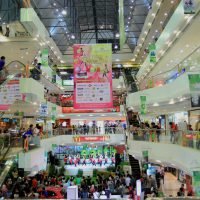