"Based on the initial success of Amex Sync for offers, we know there is significant power in combining our assets with Twitter’s platform," said Leslie Berland, SVP for digital partnerships and development at American Express. 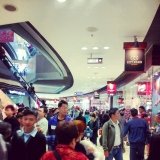