Where do mobile wallets expand globally?

In 1946, banker John Biggins introduced the first bank card, Charg-It, across his neighborhood in Brooklyn, New York. When a consumer charged a purchase at a local merchant, the charge would be forwarded to Biggins’ bank, which would reimburse the merchants and collect payment from the consumer.

This development was noteworthy because it birthed the concept of card payment networks. Ensuring consumers could use card payments while in motion emerged as a key driver of the expansion of such networks across communities, and eventually borders. Now this same tactic is being replicated as mobile wallets go global. And, as is often the case, Chinese digital consumers are playing a starring role.

China’s growing outbound tourism market was one of the biggest travel stories in the last decade. As disposable incomes rose, Chinese residents chose more outbound destinations over domestic trips for their holidays. The Chinese government also entered into agreements with other nations to make it easier to go abroad.

This boosted China’s outbound tourism, posting the greatest absolute growth in the number of outbound trips over 2012-2017, according to Euromonitor International. More impressively, China has been the largest outbound travel market since 2012, with Chinese travelers now collectively spending more than Americans and Germans when traveling abroad. China is set to increase its lead over other countries, with Euromonitor projecting China to show the largest increase in outbound spending between 2017 and 2030.

Players, such as Alipay and WeChat, which offer Chinese consumers lifestyle-driven apps with commerce capabilities, are powering many of these transactions in China and now abroad. These Chinese wallets are moving west, as the spending power of the country’s residents grows and the government improves international cooperation, allowing consumers to travel to more nations.

Alipay, which has an estimated 520 million active users, now supports payments in 27 currencies across 30 countries. “It allows Chinese consumers to spend with the method they are familiar with,” explained Souheil Badran, president of Alipay North America, at Money 20/20 US in November 2017. In particular, Alipay has partnered with a number of payment providers, including First Data, Verifone, Payworks and Stripe, to expand acceptance outside of China. Payment partnerships will be important as connected Chinese travelers grow in number and venture further. Euromonitor forecasts that Chinese residents’ outbound tourism expenditure will be among the fastest growing globally, with a 7.4% compound annual growth rate over 2016-2030 – a figure that is expected to outpace China’s overall consumer expenditure growth.

Unlike wallets like Apple Pay or Samsung Pay, Chinese wallets, such as WeChat Pay and Alipay, may have no choice but to follow Chinese consumers, because their wallets are not as exportable. Tencent, for example, attempted to launch WeChat in India, but competing services like WhatsApp derailed these attempts. Thus far, Chinese wallets have performed best in markets where there is a large Chinese influence, whether that be in terms of expatriates or regular Chinese visitors.

In many ways, the battle lines for global mobile wallet supremacy have already been drawn. China’s wallets like Alipay and WeChat will grow on the back of the expanding influence of China’s growing middle-class segment.

In contrast, the wallets offered by tech titans like Apple and Samsung, which leverage the existing card payment networks, will find greatest uptake in markets where there is a high propensity to pay with cards. That being said, the two will not compete for the same consumer. Tomorrow’s dominate mobile wallets will be one wallet that serves Chinese consumers and one that serves everyone else. 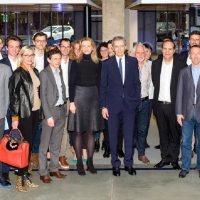 Local Chinese designers on the rise