An innovative restaurant booking app by chat recently penetrated the Hong Kong market. Alexandre Sonier, co-founder of the application BistroChat, defines it as being similar to “having WhatsApp, but with restaurant contacts instead”. Its features let its users chat directly with the staff to make restaurant bookings easy, hence making it unique in Asia Pacific.

Today, BistroChat mainly seduces expatriates living in Hong Kong, and especially women. People aged from 25 to 40 years old with high standards of living generally use this app. According to Alexandre, settling in Hong Kong was a choice. In his vision of the industry, trends are different from a market to another. He justifies his point by saying that it is difficult to launch a new application in China, as everything is concentrated on QQ and WeChat platforms. In the same way, “the US is saturated, as the app offer is too wide”. This is in opposition with Asia Pacific, and especially Hong Kong, as BistroChat co-founder says “people buy more and more smartphones, while constantly looking for new apps. We think this it is the right time to launch a new app in this region”.

This application is the work of three men who used to work in different startups across the world for a few years. As app developers, they managed to cover all the skills needed to launch their project, making it possible to build it in-house. Raised investments led to the creation of an MVP, allowing the company to grow within the industry. 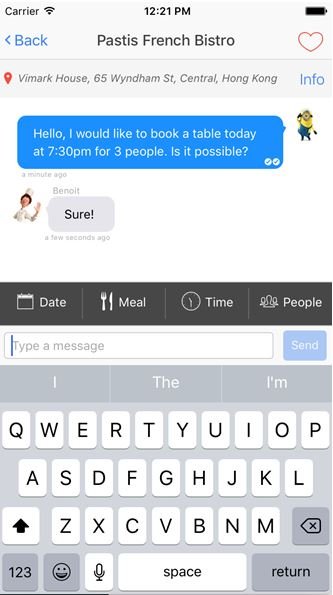 The particularity of BistroChat is that it is hassle-free. Today, two options are possible when it comes to booking a table in a restaurant: calling; or online reservation, which can take more time because of a longer process. By entering the market, BistroChat offers an instant connection between restaurants and its customers. Making a reservation via this app is done through chat, hence directly relating the client to the staff.

Furthermore, competitors send an email to the restaurant in order to notify them of a new booking. Alexandre notes that this cannot work with last minute bookings, hence justifying that chat is more convenient. According to him, instant confirmation can be made, and name and phone number spellings are no problems anymore. Those features make the app more appropriate for special requests.

It is thus with the objective of standing out from the broad app offer on the market that BistroChat maintains its efforts and innovation processes. As its co-founder states: “we don’t see an app as a one-time development but as a continuous process of improvement”. This leaves plans for building new features such as the AI, which would suggest and recommend to users new and trending restaurants, based on their preferences.

[whatsapp]
Featured Articles of the Week
Staff Writer 11 hours ago

Through a new global strategic partnership with Farfetch, Salvatore Ferragamo is enhancing its digital capabilities.
The collaboration will give Ferra…