Artfully designed by architect Nick Leith-Smith, and covering 60 square metres, the retail boutique’s interior design emulates that of Japanese tradition and culture, but in a modern form.

The focal element is the wall installation. Reflective of timber and bamboo scaffold structures, the new Ginza Six store boasts contemporary crisscrossed and folded wooden slats, which interlace and connect the walls and
ceilings, acting as shelves and hanging places for shoes and accessories. 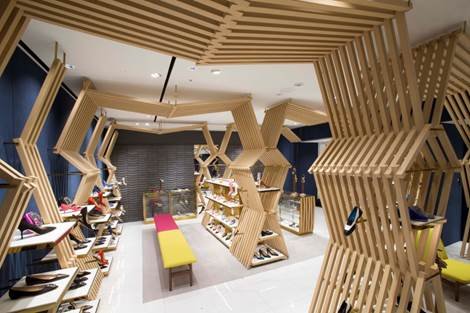 Fusing the industrial with the elegant, opposing walls are cast concrete reliefs with a curve pattern inspired by the gingko leaf. The back wall is painted in a striking blue, inspired by the traditional Japanese indigo plant dye.

The complete Manolo Blahnik collections and products will be available at the new Tokyo flagship. Bluebell is the owner of RetailinAsia