Gucci goes back to basics but with a Korean twist

The three floors of the shop carry the brand’s most popular items, from bags, wallets and shoes to clothes and the newly launched “Gucci Deco” home-furnishing items.

Just a few years ago, Gucci was regarded as a luxury brand with a slightly old-fashioned design that failed to appeal to younger trendsetters. But after Alessandro Michele took the helm in 2015 as creative director, Gucci has started a whole new chapter in its history, becoming the most searched for brand on Google in 2017, and adding over 8 million followers on the Gucci official Instagram account.

Their success was attributed not to trying something entirely fresh, but to Michele’s decision to get back to basics, returning to the vibrant colors and patterns of the old archives, but adding a 21st century twist. His designs were vintage, but not too classic – bold but not gaudy.

The flagship store carries all the popular items that made Gucci the hottest brand in town, within an interior of walls decorated in old rose, and antique carpets that add a classy ambience to the overall space. The toned-down color of the walls lends a stark contrast to the colorful products on display.

Visitors to the store can see all of Gucci’s treasures in one space, but there are two distinct reasons why the new shop is worth a look: the do-it-yourself (DIY) zone and the Korean edition goods only available at the flagship store.

The two DIY zones are located on the second and third floors and are both equipped with different ready-made patchworks and pins that, when guests choose from them, staff members are ready to sew them on in different ways. On the second floor, visitors can decorate their very own jackets, while on the third, one can create DIY handbags and clutches.

Also available are the Korea-exclusive edition items, which have been embroidered with a Korean tiger that differs from any of the animals usually seen on other Gucci products. The unique Korean tiger is printed on men’s Beastiary bags, wallets and Princetown shoes, which can only be found in this particular shop and nowhere else in the world.

And while they don’t have their own DIY zone, many of the women’s sneakers have metal buttons on them, which allow the wearer to snap different patches into place and change them as one likes.

“The Gucci flagship store is like a cabinet of curiosities that’s made to please and inspire visitors,” said a staff member on the day of the opening. “The store is a space where you can experience the unique brand culture of Gucci.” 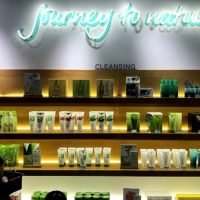 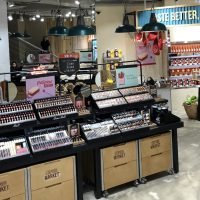