Less than three months after selling a 49 percent stake in six of its existing mainland malls, China’s retail developer Joy City has put some of it cash hoard to work buying a Shanghai shopping centre from the UK’s Grosvenor.

The state-owned Chinese retail specialist paid RMB 1.4 billion ($202 million) to pick up the Parkside Plaza mall in Shanghai’s Putuo district from the Grosvenor Vega China Retail Fund, according to an announcement to the Hong Kong stock exchange. The fund is a specialty vehicle managed by the company belonging to the Britain’s Duke of Westminster.

The 126,000 square metre shopping complex welcomed the first LEGOLAND® Discovery Center in China earlier this year. Other tenants include Tesco and Uniqlo.

In August, the real estate development subsidiary of state-owned food conglomerate COFCO sold a 49 percent stake in six mixed-use projects across China to an investment fund controlled by Singapore’s GIC and China Life for RMB 9.29 billion ($1.4 billion). The deal was part of the developer’s decision to go asset light, but it appears the Parkside Plaza acquisition was too good to pass up.

While the figures may not be as eye-catching as the city’s soaring home prices. The retail scene in Shanghai has been active this year despite continued talk of e-commerce putting malls in China under pressure.

Real estate services firm JLL, which represented Grosvenor in the transaction, noted that this is the fourth such tranaction that the firm has been involved in since March of this year.

Keppel Land, Joy City and Shanghai’s other retail players will also face increased competition in 2017. CapitaLand revealed it was opening two malls in the city next year as part of a plan to bring six new shopping centers to the mainland. 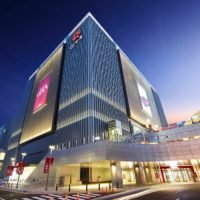