The sassy makeup brand, 3INA, has teamed up with the Asian distribution accelerator, the Bluebell Group, to develop the brand in South East Asia.

On 6 October 2017, 3INA opened its first mono-brand store in Singapore in Tampines, it will open a second in ION on 25 October, and a third one in Junction8 on 22 November, these following the openings in Australia earlier this year, where it opened two locations in Melbourne in June; one in Melbourne Central, the other in Southlands. Launched in 2016 by Mark Eve and Pablo Rivera, the very first 3INA makeup store opened in London in February.

3INA’s mono-brand presence, the innovative offer and a strong store experience soon spread beyond the UK and is on track to rival KIKO Milano and LVMH-owned Sephora

In the last 12 months, Rivera and Eve have pushed 3INA’s colourful and energetic cosmetics into Europe too, through e-commerce distribution with online majors such as Asos.
The plan for 3INA in Asia, after the Singapore launch, includes opening many more doors across Asia over the next three years.

Since the 3INA customer is the Millennial, the digital platforms have been a large part of the brand’s marketing and selling strategy. Social media and influencers have been key to its success.

Before 3INA, Eve and Rivera launched Global Retail Partners, a UK-based privately held global investment and retail consulting firm. The pair managed to self-fund the infancy phase of 3INA, but in the last 12 months the brand has secured outside investment, as well as priceless industry expertise. Cristina Cobo, previously at KIKO Milano, is now leading the product development and working on a bold, brave, and new approach to beauty. This, the link with other strategic partners, and the new financial support has been crucial in 3INA’s surging growth and in preparing it for entering the cosmetic market in Asia, one that is dominated by large global firms with big digital advertising budgets and even bigger voices.

Bluebell Group is the owner of Retail in Asia 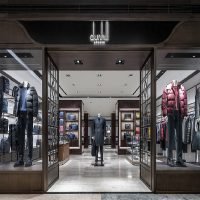