Where are the world’s most expensive retail locations?

Shops along New York’s Upper 5th Avenue are paying the world’s highest rents, according to one global real estate firm.

The likes of Cartier, Abercrombie & Fitch and Apple have flagship stores dotting the 5th avenue stretch between 49th to 60th Street, and are footing rental costs of $3,000 per square feet annually, according to Cushman & Wakefield’s “Main Streets Across The World” report.

The annual report analysed 462 top shopping streets in the world and ranked the most expensive locations in each country by their prime rental value.

After New York, Hong Kong had the second most expensive shopping location in the world despite a drop in rents in the past 12 months, according to Cushman & Wakefield’s findings.

SEE ALSO: 10 most expensive shopping streets in the world

Retailers in Causeway Bay, who are already hurting from a slowdown in Chinese tourist traffic and spend, are forking out $2,878 per square foot in rents annually.

Paris’ Avenue des Champs Elysees was the third most expensive location globally, and the costliest retail space in the EMEA region, with an average annual rent of $1,368 per square foot.

The demand for retail space on the famous French boulevard has remained resilient, as seen from the presence of new retailers like Skagen and fast-food chain Five Guys, the report said.

New Bond Street in London had the fourth highest rents globally at $1,321/square foot, as footfall figures remained healthy and retailers were willing to pay a premium to secure the sites, Cushman & Wakefield said. 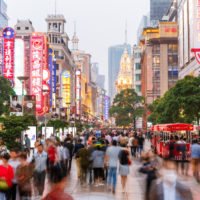