Omotesando is an iconic showcase street and home to the world’s leading luxury brands. The beautiful setting of the tree lined street is globally renowned and provides an idyllic backdrop for the luxury shopping district.

Opening a store off the main street and in the highly sought-after location celebrates the
continued success and development of the business with Bluebell in Asia. Kristina Blahnik, CEO of Manolo Blahnik says: “I first visited Omotosando in 2015 and since then it has always been a key focus for us. I am very proud that we are finally able to open a store there, with our excellent partner Bluebell.”

The flagship store showcases Blahnik’s much-loved women’s classics and fashion styles for which his devoted clients return season after season. A new men’s category also launches for the first time in Japan and is housed on the second floor of the stunning new store.

The recent success of the men’s business which launched in London in 2018, also launched in the United States earlier this year, making Japan the third territory to offer the category.

Adding to other Manolo Blahnik spaces all over the world, the new store features a unique design by the brand’s long-standing architect Nick Leith-Smith who sits down with Manolo Blahnik himself and CEO, Kristina Blahnik to come up with an original concept for each location.

The layering of tactile materials such as wool and velvet and stark finishes such as brushed aluminum provides a bold contrast and set the scene for Blahnik’s whimsical and colourful creations. Clean, minimal and modern, the shopping environment keeps still the ‘living room’ style, which Blahnik’s spaces are renown for.

The boutique displays injections of colour; hues of blue, orange and yellow on the decorative furnishings such as ottomans and a
checkered carpet. 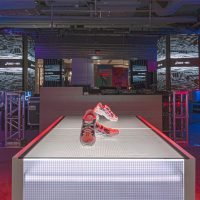 HBX announces its first co-branded shoe with ASICS
Next Article 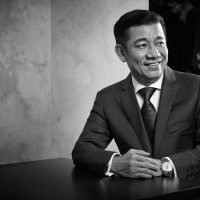 EXCLUSIVE INTERVIEW with AD TIME: a lifetime brand starts with a lifetime commitment