Southeast Asia will be one of the world’s fastest-growing markets for e-commerce revenues in 2014, new research from Frost & Sullivan shows.

Total revenues from B2C e-commerce in the six largest Southeast Asian countries (Indonesia , Malaysia , Philippines , Singapore , Thailand and Vietnam ) reached US$7 billion in 2013. This is expected to grow at a compound annual growth rate (CAGR) of 37.6 percent to reach USD34.5 billion by 2018.

"Per capita income is rising in Southeast Asia and more consumers are using the Internet through PCs, smartphones and tablets. There is no dominant player in the regional market but foreign companies such as Amazon, Rakuten and Alibaba are all expanding in the region and there are several strong domestic companies hence the region is very competitive despite its infancy."

There are, however, several factors that are inhibiting the growth in the region. For one, Frost & Sullivan said credit card ownership is less than 10 percent of the population in some Southeast Asian markets and upwards of 50 percent of the population in some countries lack bank accounts making payment a major issue. Internet fraud is also very high is some countries such as Indonesia which further discourages e-commerce use.

Nonetheless, Einstein said the market will continue to expand and will eventually consolidate. 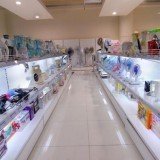 Electronics stores a hit with buyers in Vietnam