Recently, American retailer Macy’s announced that it will launch an e-commerce site in China in 2017. Will Macy’s follow the footsteps of other American giants such as e-Bay, which failed miserably, or Amazon, which couldn’t gain much footing in China?

E-commerce in China is fundamentally mobile. According to Bloomberg, the country has more than 1 billion smartphone users. Nearly 90% of Chinese shoppers have purchased items via a mobile phone. Many Chinese simply bypassed the PC era altogether and leapfrogged into mobile.

Companies must have a mobile-first strategy, redesign their e-commerce sites with sophisticated mobile capabilities, and ensure a smooth shopping and checkout experience entirely on mobile applications.

E-commerce in China is pervasively social. Unlike in America where Amazon and Facebook are largely separated, Chinese e-commerce is closely linked to social media sites such as Weibo and WeChat. Chinese consumers rely on reviews and word of mouth recommendations from trusted sources to make decisions on products.

Another phenomena in China is the rise of “key opinion leaders,” or KOLs. They are highly influential individuals such as bloggers and celebrities with large numbers of followers ranging from thousands to millions. For brands to survive in a highly competitive market, companies need to learn to leverage the influence of KOLs to communicate to their customer base and build loyalty.

E-commerce in China is increasingly driven by big data. A recent survey by KPMG indicates that more companies are using data and analysis (D&A) to interpret consumer behaviours and predict future trends.

Baidu, Alibaba and Tencent, so-called BAT, have the most valuable data sources. Multinationals are using BAT’s D&A to target customers. In order to remain competitive, companies must employ advanced data collecting techniques such as real-time scenario modelling and micro-targeting to have deep insights about Chinese consumers. 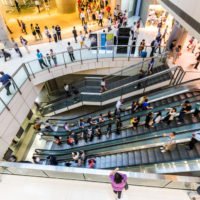 How to tap into China's booming activewear market