Versace has big expansion plans. During a recent investor day, executives at the company announced plans to open more than 100 new stores by 2022.

SEE ALSO : Versus to merge into Versace Jeans line

“It’s very clear: The productivity in our stores is not what it should be,” Jonathan Akeroyd, Versace’s CEO said, Bloomberg reported.

He continued: “We need to rapidly increase the productivity and this will really be the real driver to reach us to our $2 billion” revenue target.

The luxury brand was bought by Michael Kors in September 2018 in a $2.12 billion deal.

At the time, Michael Kors, now Capri Holdings, outlined its plan to more than double Versace’s revenue to $2 billion.

In 2017, Versace posted revenue of 686 million euros, equivalent to around $772 million at today’s exchange rate.

Capri wants to expand from the existing 188 Versace stores to about 300 by 2022, with new locations in each geographic region, Bloomberg wrote.

CEO Akeroyd all said that all of Versace’s 28 US stores will undergo a full refurbishment. 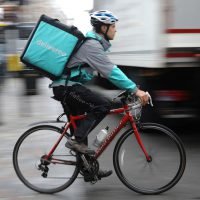 It is the year for unicorn spottings