Optical 88 has launched a new campaign to celebrate its 30th anniversary, telling the story of treasuring good memories among family members.

Named “Wear Your Beautiful Life”, the campaign tells the story of the relationship between a pair of typical father and daughter in Hong Kong.

As time goes by, the father and daughter get estranged but with the help of 88 Bear – the brother-like figure in the family – the father’s old glasses flashed back to invaluable memories over the past 30 years. The flashbacks allowed both the daughter and audiences to revisit collective memories of Hong Kong.

Apart from the full version which was first launched on TV and on social media platform, a one-minute version was created for TV and cinemas.

Further social media engagements will be rolled out in due course, inviting parent-KOLs to share their experiences, and to introduce the significance of the brand video’s Hong Kong elements spanning over three decades.

“Family is our greatest treasure. We should show more affection by offering a simple hug or company whenever we could. This is a message we are trying to convey through the film, and to remind our audience about Hong Kong’s changes in the past 30 years, where Optical 88 has always been there, growing together,” Canyo Ho, group director of Optical 88, concluded. 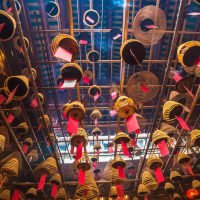 The threat hanging over Asia's tourism