The interior of Cafe Yeonnam-dong 239-20 in Seoul, South Korea makes customers feel as though they’ have stepped into a cartoon world.

Most cafe owners know it takes more than just great coffee to create a successful business. From an Instagram-worthy Wes Anderson-esque cafe in the Philippines to a coffee shop shaped like a Rolleiflex camera in South Korea, a space’s design is key to drawing in customers.

One cafe to have recently received hype for its novelty interior is Cafe Yeonnam-dong 239-20 in Seoul. The eatery created an incredible space that makes customers feel as though they’ve stepped into a cartoon world.

The artistic, monochrome design was inspired by Korea’s hit TV show, W by Lee Jong-suk and Han Hyo-joo, in which the characters clash between “two worlds”—the real world and a fantasy world inside a webtoon.

The design of Cafe Yeonnam-dong 239-20 creates a 2D optical illusion, which makes customers feel as though they’ve crossed dimensions into a comic book illustration.

When visitors step through the door, they’re greeted with black and white comic strip furniture, walls, and floors. Even the mugs, dishes, and cutlery look like flat line drawings.

It helps that the owners have created a welcoming environment.

If you want to experience this cafe for yourself, you can find it in the popular Yeonman-dong district in Seoul. If you can’t make it to South Korea, you can still feed your wanderlust by checking out the cafe’s Instagram. 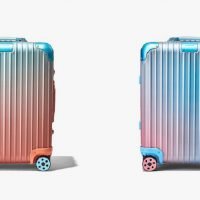 Rimowa collaborates with Alex Israel for its latest suitcase