New Balance’s support for Donald Trump will cost it dearly

Editor’s note: Too soon? That’s what many millennials are saying after American sneaker company New Balance publicly announced their support for Donald Trump’s new presidency the day after the results. In an opinion piece on Complex Sneakers, Nick Grant explains why the company may be in trouble after the overly vocal show of support.

New Balance has always been a mainstay in my life, no matter what phase I was going through. Growing up in Washington D.C., we gravitated toward classic colourways of the 574 and 1500, serving as one of the few sneakers of uniformity among the black community.

In the late-2000s/early-2010s, we saw the meteoric rise of their American-made sneakers due in large part to the booming success of menswear and, more specifically, Americana.

And today, the brand is seeing incredible support from the streetwear and fashion industry with high-profile collaborations with Ronnie Fieg, Concepts, and END Clothing. But all of this went to absolute shit with their untimely decision to publicly support the election of Donald Trump, the first major sneaker company to do so.

The Boston-based brand decided to risk alienating over 63 million Americans when its VP of public affairs, Matt LeBretton, sounded off about welcoming Trump’s presidency and his stance opposing the Trans-Pacific Partnership—a free-trade agreement that essentially rewards brands with lowered tariffs who manufacture overseas—a contentious deal that helps sportwear rivals like Nike.

New Balance has made it a priority to make a certain portion—according to New Balance, the brand manufactures 4 million U.S.-made pairs per year—of its sneakers in the U.S. This is something they’ve been doing since the brand was founded in 1906. (The brand also operates a factory in Flimby, England, and is dedicated to domestic manufacturing in multiple markets.)

Soon after the backlash, they released a statement saying they were merely supporting the opposition of the trade agreement, not any of Trump’s larger geopolitical agenda items, or lack thereof. 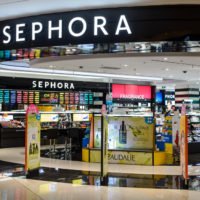 Sephora China opens its 200th store in Shanghai
Next Article