Jimmy Choo is taking a preemptive strike at some potential competition.

Xianjie Zhu, a 19-year-old from Guangdong Province in China, goes by Jerry Chu at Central Saint Martins, where he’s a fashion student specialising in menswear.

Last year, at the recommendation of his father, he applied to register his English name in Beijing in case he decided to use it to start a clothing line in the future. With two years left of school, Chu had not yet given starting a line any serious thought, he said.

Last week, the footwear and accessories brand Jimmy Choo filed a request to invalidate Chu’s trademark, arguing that the similarities between the names Jimmy Choo and Jerry Chu would cause confusion in the market.

The company cited previous trademarks it has successfully invalidated, for trademarks including Jenny Choo and Ray Choo.

Susan Scafidi, founder and director of the Fashion Law Institute at Fordham University’s School of Law, said these disputes are common — so much so that she always urges young designers not to name their businesses after themselves.

“Designers with common names in particular often have to engage in protracted legal disputes with companies who already own the same or similar names,” she said.

But fashion consumers today are accustomed to distinguishing between namesake labels with similar names, such as Alexander Wang and Vera Wang, said Scafidi, and there is hope for independent designers.

Scafidi explained that a significant difference between those disputes and Jerry Chu’s situation is that in the US, trademarks must be used in commerce in order to be valid. Having an active business can also help demonstrate that a brand with a similar name is not producing similar products or “trademark squatting” in order to get a payout from a larger brand. Brands with global name recognition like Jimmy Choo are especially vigilant about trademark protection.

“Jimmy Choo may well have assumed that the Jerry Chu registration was just another attempt to trade on the established Jimmy Choo name, since soundalike registrations are a particular problem in countries like China, whose primary writing system uses characters rather than letters,” said Scafidi.

Chu and his lawyers will wait to see what the trademark committee decides, he said, hoping that the situation can be resolved quickly.

The student posted the legal papers on Instagram this week, catching the attention of fashion’s social media watch dogs, Diet Prada, who echoed his frustration and spread the word.

“I’m surprised so many people would care about me, an independent designer, a student,” he said. 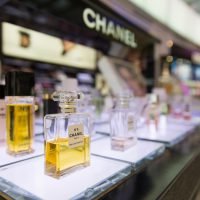