How new balance ran into a wall in China

Has the Boston-based athletic-shoe maker made a mistake by fighting a two-decade trademark battle?

The New England shoe company New Balance had been tied up in litigation for a year and a half in the southern Chinese city of Guangzhou, having been sued for trademark infringement—sued for using its own name.

A man named Zhou Lelun had brought New Balance to court for using his trademark, Xin Bai Lun, a rough translation of New Balance. Zhou’s relatives had first applied for a trademark on New Balance’s translated Chinese name all the way back in 1994. At the time, it was common among a certain class of Chinese entrepreneurs to register foreign company names in the trademark office and then to propose negotiations, or file lawsuits, when the companies expanded to China.

Never mind the fact that Zhou made few, if any, shoes under the name, or that New Balance had been selling shoes out of Boston’s northwest side since the 1960s. Experts on Chinese trademark law were pretty sure the company was headed for disappointment.

Sure enough, in April 2015, the hammer came down. The Guangzhou court ruled for Zhou. And that was less shocking to the bands of lawyers working for multinationals in China than the damages New Balance was ordered to pay. New Balance’s business boomed, the judge contended, because of its name, Xin Bai Lun, and that name belonged to Zhou. The judge ordered New Balance to pay half of its profits in China from the time Zhou received the trademark, in 2011, till the time of the lawsuit in late 2013. The total came to $15.8 million.

New Balance disagreed with the ruling for a host of reasons, one of which was that the company barely used the Xin Bai Lun name except on some advertisements and websites, never on shoes. It said the name hardly constituted a trademark. The company has hired a new counsel and appealed the decision. But so far New Balance has lost the fight it picked—and as it waits for a higher court’s ruling, it’s worth asking whether it’s time for them to bow out.

China’s trademark laws, though relatively advanced, break with Western ones in several key ways. The most important one: China is a first-to-file country. “This means that whomever files a trademark first gets it,” says Dan Harris, a partner at Harris Moure in Seattle focusing on China, regardless of whether another company is already making a product with the same name in, say, America.

New Balance is hardly the only company losing trademark battles in China. New Balance stands out, though, for the sheer amount of time it has spent litigating in Chinese courtrooms—almost two decades. And despite all that history, it now finds itself fresh off its biggest court loss. The case illustrates both how far a foreign brand can go in protecting its name and the downside of an aggressive strategy in China. Other brands might want to pay attention.

The company’s appeal was supposed to have been decided by December 2015, but as of this May New Balance was still waiting. 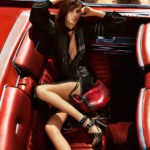