Is Asia changing its way of thinking about food?

More people are eating today than yesterday. The majority of these people live in Asia, a continent which has an intense cultural connection to food. Securing a better way to feed Asia’s growing population is what motivates JUST CEO Josh Tetrick to challenge the status quo of the food industry.

Tetrick, 37, sees Asia as the tip of the spear to fix the world’s broken food system.

“We need to answer the question of how can we produce enough food for a planet which will see 70 percent growth in food demand between now and 2050,” says Tetrick, whose company has attracted high-profile investors such as Hong Kong business magnate Li Ka-shing.

One of the fastest growing segments of the $8 trillion global food and agricultural market is the multi-billion dollar egg industry. China produced over 30 percent of the 1 trillion eggs that were laid last year which has raised numerous environmental concerns on the continent. To disrupt this, Tetrick introduced Just Scramble at the flagship location of Green Common, a plant-based dining and shopping store that has chains across Hong Kong. Just Scramble is made from mung bean which is one of Asia’s most familiar beans. It looks and tastes just like an egg, it is high in protein, has zero cholesterol and sold over 800 orders of “Just Scramble Teriyaki” and “All Day Just Scramble” in the first six days.

Just Scramble requires less water and emits fewer carbon emissions than conventional eggs, but Tetrick knows that this does not drive consumers. “I think far less than 1 percent of the 7.4 billion people on earth are driven by the environmental benefit of plant-based food. People just want to feed their family with something they have confidence in. They want food that tastes amazing and makes them feel amazing,” says Tetrick.

Green Common founder David Yeung is redefining the whole experience of selling plant-based products. “The product has to be good, innovative and fit the brand. If so, we can make foreign brands become an overnight success,” says Yeung “We know what people crave in Hong Kong, that makes us so valuable to translate these products for the Asian palette.” Green Common is already seeing great sales from the American made Beyond Burger, the world’s first plant-based burger that looks, cooks, and tastes like a fresh beef burger. Providing an option for consumers to tweak their habits is what both CEOs believe will lead to wholesale change.

Yeung is confident Hong Kong can serve as a gateway into mainland China and the rest of Asia. Yeung believes China is desperate for a healthy brand people can trust, and is using the Starbucks strategy to expand. “For 5,000 years China never drank coffee. Now, after Starbucks sold it as a lifestyle, there are over 2,500 Starbucks in mainland China. That is not supposed to happen, but Starbucks became people’s second living room,” Yeung said.

Yeung’s goal is not to open a thousand Green Commons in Hong Kong but rather grow business to business in order to make impactful change throughout Asia. By introducing plant-based options through restaurants and catering companies, an entire office building, school, or hospital can drastically reduce meat consumption. By doing this, a fair market is being created where people from all demographics have access to sustainable foods.

Josh Tetrick also envisions a world where everyone is enjoying “just” food, but he knows they cannot do it alone either. “I want to inspire other companies to do this,” Tetrick continued “For the institutions and the companies, who are thinking about what’s next? Take a look at food, because we need help and Asia needs help. But we can’t wait, we have to do it now.”

Much of the energy surrounding the plant-based movement in Hong Kong started in 2011 when Sonalie Figueiras began the personal blog Green Queen which quickly turned into a trusted media source for healthy eating.

From this loyal following, Figueiras co-founded Ekowarehouse, the world’s first online global trade platform for sourcing certified organic products and is now available in over 140 countries. “We want to become the Alibaba of organic food, and connect the organic world,” said Figuerias. “Here in the East, the sustainable conversation does not work. Personal health and safe eating for children is the conversation we need to have moving forward.” 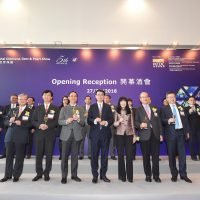