Although Luckin Coffee, a chain of coffee shops in China,  disclosed a loss of 857 million yuan (RMB) last year, they are still positive about the potential for growth in China.

Meanwhile, a Canadian coffee brand, Tim Hortons, announced its expansion into the country, planing to open more than 1,500 stores in China in ten years.

SEE ALSO : Tim Hortons is bringing Timbits to the Philippines

Convenience store’s brewed coffee stand out in a crowded market

Coffee brand giants are everywhere, but  coffee sales from convenience store never falls behind, occupying the lower level consumer market. According to the FamilyMart Co., Ltd., there are more than 2,000 stores in the country now selling freshly brewed coffee and the annual revenue in 2018 has exceeded 50 million cups. FamilyMart  revealed that their goal is to sell 100 million cups of coffee in 2019.

Another profitable coffee sales business people usually neglected is the Western-style fast food restaurant. Since KFC, also known as Kentucky Fried Chicken, upgraded the coffee products in 2015, their coffee sales has grown rapidly. In the first three quarters of 2018, KFC sold more than 63 million cups of coffee at an average rate of 2.5 cups per second.

“The growth of coffee market among convenience store and western restaurant reflects the characteristics of current Chinese coffee market, a market with multi-level, multi-channel and multi-consumer profile.” China food industry analyst Zhu Danpeng said that this also proves the Chinese coffee market still have a big room to invest and develop.

The current high profit of the coffee industry leads to competition

Some industry consulting companies predict that the sales of the Chinese coffee shop will grow at a compound annual growth rate of 15% from 2017 to 2025, and will reach more than 100 billion yuan (RMB) by 2025. The number of coffee shops in China is expected to reach more than 80 thousand in the near future.

However, the competition between freshly ground coffee market cannot be avoided. Zhu believes that one of the fundamental reasons for tight competition is that the profit of the this particular beverage industry is extremely high.

Recently, Zhu went to Yunnan for site visit and he communicated with the local farmers. He said that the coffee bean purchase price of the famous coffee brand is about 12-16 yuan/kg, which can be used to brew 10-12 cups of coffee. In other words, the cost of coffee beans is less than 2 yuan (RMB) per cup. “It is obvious that the gross profit of this industry has reached several hundred percent.” 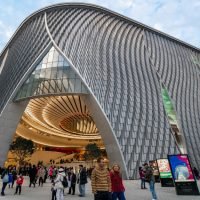 The long-awaited Xiqu Centre opens in Hong Kong
Next Article