It was 1994, when James Jebbia opened the doors to his Supreme skate store on Lafayette Street in downtown Manhattan, in its own way also an incredible NY moment.

Without realizing it, Jebbia managed to bottle the energy of the city and the style of the streets with his skate and fashion brand.

Throughout its 18 years, Supreme has defined and refined what it means to be cool. The brand’s effortless logo – a Barbara Kruger-influenced red box surrounding a white block typeface – is an iconic emblem for a worldwide gang as recognizable as the LV Monogram or Hells Angels’ rocker for those who know.

Jebbia’s personal style is understated, neat and crisp, today’s outfit being a grade-four buzz cut, worn with a button-down Oxford shirt and dark jeans. His accent has a transatlantic shade, yet is still resolutely British. Born in the States to a British mother and American father who worked in the US Air Force, James and his family moved to Britain when he was just 18 months old, before he gravitated back to New York aged 19.

“I came over here with $100; it was 1983 and I just ended up staying. New York at that time was very inexpensive and it was very easy to get a job. We lived on Staten Island and you could get cheap rent. It was a good time to be in New York,” James said.

Sitting behind his desk in the Supreme office in Soho, James’ work space is bright and airy, with KA WS artwork and a framed photo of the Godfather of Soul, James Brown, sitting on the bonnet of his silver ghost Rolls Royce with an MVP license plate hanging on the walls. On the floor in the corner sits a collection of new boot samples and a pair of legendary rapper and graffiti artist Rammellzee’s 3-D tracers pieces.

James’ office is located above the space where he first found work in fashion: a store then known as Parachute, where he was taken under the wing of its owner, Morgan. “He was a good boss, a real mentor. Parachute was a bit futuristic, it was kind of cool; Gary Numan came in and Michael Jackson wore the leather jacket with the big epaulettes. It was a great time but I just wanted to do more,” he told GQ.

With his girlfriend at the time, James started a market stall on Broadway and West 4th, making and selling backpacks. In 1989, he opened his first seminal store, Union, on Spring Street.

The key stores then around the Downtown area were X-Large, Stüssy, Triple Five Soul and Union. While James was trying to stock Stüssy, a chance meeting with Shawn Stüssy led to James running the Stüssy store on Prince Street. “I wouldn’t be doing what I’m doing without what Shawn has done,” James admitted.

Shawn Stüssy was the forefather of what would become streetwear as we now know it.

With an eye on the skate and surf cults, Shawn created a style with Stüssy that was coveted globally not just as clothing but as a way to join Shawn’s posse, the Stüssy World Tribe. Setting up teams in NY, London, LA and Tokyo, his collaborators included the brains and brilliance of designers Paul Mittleman, Hiroshi Fujiwara and distributor Michael Kopelman. From hip-hop kids to ravers, surf dudes and grebos, they were all drawn to Shawn’s baggy denims and signature hand-written emblems.

When Shawn moved on from Stüssy and sold his share of the business, Jebbia made the decision to launch Supreme.  Everybody who worked in the store was a skateboarder. And there were a lot of young people starting to skate and they would gravitate towards the store because of the crew who worked there, so the store became like a hangout.

The architecture of the Supreme stores and their sales assistants have always played a crucial role in establishing the brand identity, with the staff bringing the ubiquitous, middle-finger-to-the-world attitude. The shop kids were gnarly and raw and generated an intimidating, real vibe where skate videos played all day and the freshest hip-hop mixtapes blasted -out on to the sidewalk. But such intimidation never discouraged customers from visiting.

Gravitating to the store were a host of locals and downtown rebels. There was Justin Pierce (Casper in Kids), skateboarders including Harold Hunter and Jason Dill, artist and illustrator Gio Estevez (who was also the store manager) and Aaron Bondaroff, CEO of the anything brand, co-founder of the OHWOW art collective and model in this feature.

There was also the art and photography crowd, such as Ari Marcopoulous, Kenneth Cappello and Terry Richardson. Ari and Terry’s photography established an identity for Supreme, their images becoming synonymous with the brand. Ari’s documentation of the mid-Nineties scene forms a collaged backdrop at Supreme’s stores in Tokyo and London, while Terry and Kenneth have shot lookbooks for the brand and fly-poster campaigns and T-shirts that have seen the legendary box-logo tee worn by Lou Reed, Kermit the Frog, The Diplomats, Raekwon, Lady Gaga, Mike Tyson and the latest with rappers Three 6 Mafia.

The word-of-mouth excitement among guys interested in stylish clothes is – in this day and age – breath-taking to see. The customers know that each product comes in such limited quantities that once a particular item has gone that is it.

The Supreme look is delivered between the styles continuously appropriated by the hip-hop and skate worlds: Ivy League, collegiate, military and sports­wear themes, denim, checks, plaids and stripes, alongside a classic workwear influence. The collection weighs in with a referenced knowledge that goes into fabric, cut, details and durability, making each piece often feel and look like perfectly preserved vintage.

Over the years, Supreme has collaborated with (among many others) Levi’s, Vans, The North Face, Nike, Comme Des Gargons, Adam Kimmel, Malcolm McLaren, A Bathing Ape and W Taps on their fashion – and skateboard graphics with Damien Hirst, Jeff Koons, Takashi Murakami, Harmony Korine and most recently Jake and Dinos Chapman.

As James expands the business with additional stores around the world, (LA, London, Nagoya, Osaka, and Fukuoka, with the third Tokyo store recently opening in Shibuya), he is quick to establish that his ambition for his company is to maintain its integrity. “If I was to stop working tomorrow, I would be like, OK. I did what I wanted to do; I did what I liked, what I really believe in, and I’m fine with that. In an ideal world, we can just remain a small but tight business that grows naturally.”

James’ philosophy behind Supreme is straightforward: “We just want to make really great-looking clothes that are well-made, fit well that you can skate in.” 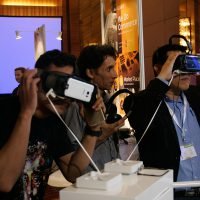