Is denim coming back?

Certainly, the denim market has been enjoying a long-awaited rebound. Sales in the $13.5 billion US women’s and men’s jeans market grew 4 percent in 2016, according to market research company the NPD Group — the category’s best performance in years.

Globally, following three years of declines, the jeans market, valued at $92.9 billion, is also expected to grow this year, with men’s and women’s categories forecast to rise this by 4.2 percent and 3.7 percent respectively, according to Euromonitor.

And as the athleisure trend begins to cool — presenting challenges for gym-to-street brands like Lululemon, Sweaty Betty and others — it would seem denim is clawing sales away from the sportswear category.

High-fashion brands such as Calvin Klein, Y/Project, Off-White, Balenciaga and, of course, Vetements, have helped along denim’s comeback, says Kurazawa, by catering to Millennial tastes, offering customization and a move away from the typical five pocket.

Denim stalwart Levi’s is in a prime position to capitalize on consumer demand for vintage styles, given its 164-year heritage, recent collaborations with hot labels including Off-White, Gosha Rubchinskiy and Supreme, and a licensing agreement with luxury label Re/Done, which “up-cycles” vintage Levi’s denim, revamping old designs appeal to a younger generation. “We’re seeing a huge revival in ’90s-style fashion and ‘near-now nostalgia’ sentiment,” confirms Karyn Hillman, chief product officer at Levi’s, who points to the popular high-rise Wedgie model — inspired by the vintage 505, but updated with a little more stretch — as an example. “I think collaborations have really added some sort of equity to the brand,” adds chief marketing officer Jen Sey.

SEE ALSO : Guess what are the hottest brands in Q3?

In response to the success of re-worked styles, the heritage denim label is ramping up investment in customization services. This includes expanding in-store “tailor shops,” where shoppers can customize purchases. (Currently, tailor shops are in 100 percent of Levi’s UK doors with a heavy presence across Europe; the brand is now looking to recreate this success in the US.) Beyond stores, it has also installed customization pop-ups at key music festivals, from Glastonbury to Coachella. Sey says the activation “brings value to the consumer,” who, more often than not, is already wearing a pair of Levi’s.

In November 2017, the company launched Levi’s Authorised Vintage, a collection of 50,000 pairs of dead-stock denim it bought back from the secondary market. “Levi’s has had the number one share of the vintage market forever,” Sey says. “We just haven’t actively participated in it [before], so we think it’s high time that we did.”

Other denim brands are also capitalizing on the demand for an authentic, vintage-style product. Frame, for example, launched a limited Rigid Re-Release collection that catered to the nostalgia aesthetic in February 2017. While the limited-edition range will not continue into Spring/Summer 2018 due to limited availability, stiff fabrics will still be a key focus for next season’s denim collection.

American brands Lee and Wrangler — both of which come under the umbrella of US apparel company VF Corp. — are also banking on reissues and archive-inspired designs to capture a younger consumer’s attention. “One of the latest capsules that we’ve done with Lee is we’ve gone into the archive to reproduce a retail product from 70, 80 years ago,” explains VF Corp’s jeanswear president Massimo Ferrucci. Wrangler’s Retro Glory collection boasts a similar missive; European stockists of the line include Asos, Urban Outfitters, De Bijenkorf and La Rinascente. “The younger consumer is attracted very much by Americana, by originality and authenticity, by product that comes from the archive.”

But while retro silhouettes and rigid fabrics are on the rise in denim, it would seem that athleisure’s influence has had lasting impacts on the category’s basics, which account for the volume of the market.

When the athleisure craze first blew up, many denim brands responded by investing heavily in stretch denims to try and compete with the fast-growing sector, a focus that continues to pay off. “Stretch is here to stay,” asserts Sey, who notes that Levi’s has actually seen an increase in demand for stretch denim as the fabric has transitioned into men’s lines.

“Consumer preferences have changed — comfort has become much more important than in the past,” agrees Hillman. “Women generally wear their jeans a little tighter today compared to the past, so we’ve evolved the fits and fabrics to cater to these evolving tastes.” She notes that skinny jeans are still Levi’s best-selling style. “We don’t see that changing anytime soon,” she adds.

Consumer desire for comfort has given birth to the rise of performance denim, another innovation that has become a growth driver for the denim sector. Brands that range from 7 For All Man Kind to Joe’s Jeans are utilizing new technologies to enhance existing fabrics and styles.

SEE ALSO : Why fashion is being killed by athleisure?

VF Corp’s Ferrucci says that growth of performance denim at Wrangler — which includes a range of technical fabrics that are water resistant, insulating, cooling, or extremely flexible — has been accelerating fast, “because it is actually used as a workwear item.” Levi’s too has ramped up investment in similar initiatives, most notably its recent Commuter Trucker jacket, created in partnership with Google. “[It’s] about creating products that meet a consumer need,” says Hillman of the line that was originally created for cyclists in the noughts. “It is about purposeful design and creative lifestyle solutions to improve people’s lives.”

The casualization of dress codes — not just in the workplace, but also for smarter occasions (one has four-figure jeans to thank for that) — has given denim a space to become an every-day go-to in a way that athleisure leggings may never be. “She might wear [leggings] to brunch with her friends on a Sunday, but she wasn’t going to wear them out on a date on a Saturday night, and she wasn’t going to wear them to work,” notes Sey.

“Denim has a foothold in certain occasions that leggings never will,” she concluded. 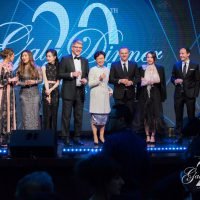