It was only in April that top Chinese KOL Gogoboi launched his own WeChat boutique “Bu Da Jing Xuan,” a platform on which he curates selections of goods from luxury e-commerce retailers like Yoox, Net-A-Porter and Farfetch to sell to his fans (he’s got over 7 million followers on Weibo).

The official price of the new collection is 7490 yuan, which is consistent with the offline price. This exclusive online sale includes seven styles (in addition to black and white, the bag also came in a variety of colors), and for each style, there were six bags available for purchase.

The result was a success. The featured black-and-white style was sold out after half an hour after the campaign went live, and within 72 hours, all of the available styles were sold out.

With a background in fashion editorial, Gogoboi’s distinct writing style is what first garnered him a loyal fan base. His witty humor and harsh comments on celebrity styles make his blog stand out in the competitive KOL landscape.

It’s never a one-way street, while bloggers are busy broadening their horizons, brands are also looking for better ways to take advantage of their massive fan economy. 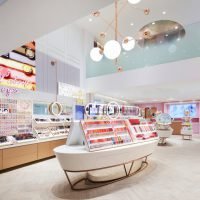