American luxury brand Coach has issued a statement saying it “respects and supports China’s sovereignty and territorial integrity” after it faced a backlash for a T-shirt design that lists Hong Kong, Macau, and Taiwan separately from China.

Images of the T-shirt, which is part of a Coach and Disney collection released in May 2018, circulated on Weibo, China’s Twitter-like social media platform, on Monday morning.

The back of the T-shirt featured a list of cities, with their country names, such as “Tokyo, Japan” and “Milan, Italy”. Both Beijing and Shanghai were named as part of China, but Hong Kong and Macau were listed separately only as“Hong Kong” and “Macau.”

Coach also came under fire for the store locator on its website which listed Hong Kong, Macau, and Taiwan as three separate countries.

The brand’s ambassador in China, model Liu Wen, apologised for not being rigorous in her selection of brands to represent and said she would end her collaboration with Coach since its behaviour had “hurt the national feelings of the Chinese people” and must be “condemned seriously.”

Coach released a statement on Instagram and Weibo, that it “respects and supports China’s sovereignty and territorial integrity” and that it had pulled the product from all channels globally.

“In May 2018, we found a serious inaccuracy in the design of a few T-shirts … We also reviewed our entire assortment to ensure compliance, and have strengthened our internal product development process to avoid the occurrence of a similar issue in the future. We are fully aware of the severity of this error and deeply regret it,” the statement said.

Coach addressed the store location concerns in the statement too, saying it had “taken immediate action to review and correct relevant website content”.

Italian fashion brand Versace apologised for a range of tops which suggested Hong Kong and Macau were not part of China, but not before the issue racked up more than 1 billion views and discussion on Weibo.

Popular Chinese fashion blogger Zoe published an online poll, asking people’s attitudes towards brands which “insulted China”. The poll quickly attracted more than 800,000 respondents, with 70 per cent of them saying they would “never buy their products even if I have nothing to wear”. 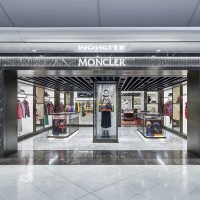