The billionaire embodying the rise of Chinese retail

“It’s horrendous. Absolutely horrendous,’ says Adrian Cheng as he walks through K11, his brand-new shopping mall and art hub in downtown Shanghai. He’s not talking about what he sees around him. He’s talking about what he sees in other malls. He’s not wrong. Step into any mall in almost any city in the mainland and you’ll find yourself in a giant, antiseptic shed of Western brands. ‘China has been growing rapidly since 1979. People have built a lot of hardware, a lot of buildings. It’s only now that the software — the personal education of the audience — is catching up,’ Cheng explains.

‘It’s time to curate new content, to start something original, something more Chinese, too.’ — Adrian Cheng

The 37-year-old entrepreneur’s mall features littler known Chinese brands and a vast exhibition devoted to handbags, called Bagism, which features bags toted by the likes of Princess Diana and Jane Birkin, alongside wild concepts designed by the late Zaha Hadid. SEE ALSO: CapitaLand to open 8 malls in 2017 Shops also showcase the latest offerings from Chinese designers that can be ordered by iPad. Names to look out for include Song Yang, whose accessories brand is Ben by Song; Huajiastudio, created by a woman who goes by only her first name, Huajia; Ran Fan, a graduate of Central St Martin’s in London; and Vega Zaishi Wang, whose work can now also be found in Galeries Lafayette in Paris. On the walls of the stores and the mall is art from young Chinese artists. They are the fruits of the K11 Art Foundation, the first non-profit and non-state owned art foundation in China, which Cheng has established to incubate emerging contemporary Chinese artists and curators, and to promote public art education. In 2013, he spearheaded a collaboration with Central Saint Martins, setting up an annual full MA scholarship to help students from Hong Kong and the mainland study at the London college. Small wonder he made it on to the ArtReview2014 and 2015 Power 100 lists as one of the contemporary art world’s most influential figures. Read more about Adrian Cheng. 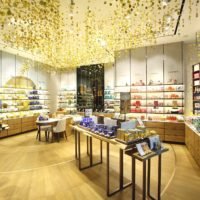