PVH Corp. announced the appointments of Allison Peterson, Chief Customer Officer for Best Buy Co., Inc., and George Cheeks, President and CEO of the CBS Entertainment Group, to its Board of Directors.

Their deep experience in successfully navigating consumer disruption will provide perspective as PVH continues to evolve as one of the world’s largest apparel companies.

“PVH is pleased to welcome Allison Peterson and George Cheeks to our Board of Directors. We believe that their expertise in understanding target audiences, digital leadership and creating consumer connections will build on our inherent strengths – two of the most iconic fashion brands in the world and the talented team behind them,” said Manny Chirico, Chairman and CEO.

“It is important to have new, diverse voices advising our successful strategy for the new normal,” continued Manny.

Peterson is responsible for the Customer Strategy, Consumer Insights and Research, Experience Design and Membership/Loyalty for Best Buy, playing an instrumental role in building out its digital presence to align with new consumer behaviors. She has a proven track record of delivering strong consumer engagement fueled by strategic marketing, cross-channel experiences and brand positioning. Her career has been entirely focused in retail, first at Target Corp. and then in several leadership roles at Best Buy, including Chief Marketing Officer and President of E-Commerce.

With over 25 years of experience in the media and entertainment industry, George has demonstrated his deep understanding of how an iconic brand grows with its audience in the context of changing distribution, culture, lifestyles and preferences. Now driving the development of CBS’ core assets, George previously served in several senior executive positions that spanned creative, business and operational roles at NBCUniversal. Most recently, he was Vice Chairman, NBCUniversal Content Studios.

The appointments of Peterson and Cheeks are effective 26th January and 22nd March, 2021, respectively. PVH also announced its intent to appoint Stefan Larsson, President PVH Corp., to the Board as part of its previously announced CEO succession plan.

The addition of Peterson and Cheeks is part of the refreshment process undertaken by the Board of Directors, as supported by the Board’s Nominating, Governance & Management Development Committee. They continue to evaluate membership both on the Board and its Committees. Amorepacific to invest in beauty content producer Dmil
Next Article 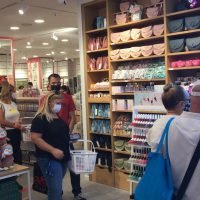