Nike said its long-time CEO Mark Parker is stepping down, effective January of next year.

In a sign of the company’s focus on digital, he will be replaced by John Donahoe, a Nike board member and the CEO of ServiceNow. Donahoe was formerly the CEO of eBay and is chairman of the board at PayPal.

Nike shares seesawed in after-hours trading on the news and were last up less than 1%. ServiceNow shares tumbled more than 10%.

Parker, who has been Nike’s CEO since he took over from founder Phil Knight in 2006, will become the company’s executive chairman, according to the press release. He has worked with Nike for four decades, including as vice president of global footwear and co-president.

Parker said in an interview with CNBC’s Wilfred Frost that Donahoe is “no stranger” at Nike and decidedly is “the best choice to come in.” He said Donahoe should “enable this next level of growth,” digitally, for the company. And he added Nike’s board has spent “many months working on succession planning. … This is not something that happens in a matter of weeks.”

He also said the decision was not prompted by recent doping allegations connected to Nike’s Oregon Project.

At the end of September, Nike’s head running coach, Alberto Salazar, was banned amid doping allegations, which reportedly included ties back to Parker. The New York Times reviewed emails from the U.S. Anti-Doping Agency that showed Parker had been briefed on Salazar’s various experiments to use testosterone cream for track-and-field athletes.

In an email to employees at the time, Parker said: “Nike did not participate in any effort to systematically dope any runners ever; the very idea makes me sick.” He also said Nike looked into the allegations against Salazar and found no violations.

“We are staying very close to the situation. We are in the midst of complex times,” Parker said.

Nike’s announcement came the same day Under Armour announced its CEO Kevin Plank will be stepping down from the role on Jan. 1.

Under Parker’s leadership, Nike has seen its stock surge and sales climb. But the company has also faced its share of corporate culture scandals and backlash over controversial marketing campaigns.

In 2018, President Trevor Edwards, who many saw as Parker’s likely successor one day, retired.

The retirement came after complaints surfaced at Nike in March 2018, when a group of women presented Parker with a survey on gender discrimination. Edwards was blamed in the lawsuit for creating and exacerbating a “hostile work environment.” Parker responded by restructuring his leadership team, which included ousting Edwards.

Nike in 2018 admitted it failed in hiring and promoting women, and the company ousted at least 11 executives and announced raises for 7,000 employees after conducting an internal review of its pay practices. Parker apologized to employees at large in May.

But the hurdles have not stopped there.

Nike, spearheaded by Parker, has had a history of using controversial marketing campaigns to boost its brand.

In September 2018, it dropped a new ad campaign for the 30th anniversary of “Just Do It,” featuring former San Francisco 49ers quarterback Colin Kaepernick. This pulled in a wave of responses, both for and against the commercial slot. But Nike’s “Dream Crazy” campaign ultimately won the “outstanding commercial” award at the Creative Arts Emmy Awards this year, marking the first time a Nike commercial had won the award since 2002.

Nike’s poor internal practices were back in the spotlight again this year, when three female Olympic runners came forward, penning op-eds with The New York Times, to say their contracts with Nike were reduced because they were pregnant.

Sprinter Allyson Felix, who has since signed a contract with Gap’s Athleta brand, said Nike wanted to pay her 70% less after she gave birth. Nike responded to their stories by revising contracts to include more protections for pregnant athletes, including adding an 18-month period before a baby’s due date where a woman can not be hit with performance-related reductions to her pay.

All of these instances have not appeared to hit Nike sales, however, nor investors’ sentiment.

Shares hit an all-time intraday high on Monday of $96.87. The stock has rallied 29% this year, bringing Nike’s market cap to roughly $149.2 billion. Under Armour shares are up about 21% over the same period, while smaller rival Lululemon’s stock has soared nearly 68%.

The brand has struggled in North America, but that’s been the case for rivals Adidas and Under Armour, too, as the playing field has become more crowded.

The company has forecast revenue growth for the current fiscal year to be up a high-single-digit range, slightly topping sales growth in fiscal 2019.

Apple CEO Tim Cook, who is Nike’s lead independent director and chair of the board’s management succession committee, said: “In Mark and John, we have two exceptional leaders. With Mark’s leadership, Nike’s revenue tripled and Nike became one of the most iconic and innovative brands in the world. John has a proven track record as a highly successful three-time CEO and, like Mark, leads with integrity and loves Nike and the world of sport. I know them both well and I could not be more excited they will work together to lead Nike’s next chapter.” 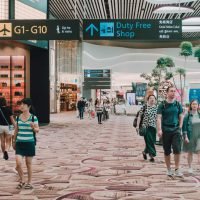 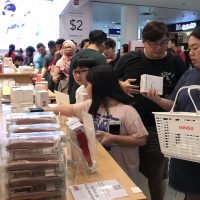