Liliane Bettencourt, heiress to the L’Oréal cosmetics empire and the world’s wealthiest woman, has died at 94.

Her death was announced in a statement from Jean-Paul Agon, chief executive officer at L’Oréal Group. She died Wednesday 20 September at her home in Neuilly, a suburb west of Paris, according to a company spokesman.

Bettencourt, the only child of L’Oréal SA founder Eugene Schueller, owned about one-third of the company’s shares. During her lifetime, the Paris-based company grew from a small hair-dye supplier into the largest maker of beauty products with more than 30 brands including Lancome and Garnier sold in about 140 countries. In 2016 the company reported revenue of 25.8 billion euros ($27 billion).

Bettencourt’s net worth was $42.5 billion, according to the Bloomberg Billionaires Index.

Her death will fuel speculation about Nestle SA’s 23 percent stake in L’Oréal, the second-largest holding after the Bettencourt family.

The Swiss food company and the Bettencourt family have a shareholder agreement that limits either side from raising their respective stakes until six months after the death of Liliane Bettencourt, according to the company’s 2016 registration document. This restriction will now lift in March 2018.

L’Oréal in 2014 bought back 8 percent of its stock from the Swiss food company, which is free to sell the cosmetics company’s shares. Nestle’s website notes it will continue to act in concert with the Bettencourt family for the remaining duration of the shareholders’ agreement.

“Friendship, taste for life, knowledge, health. I would say that these are the things that are the most valuable,” Bettencourt said in a rare interview with French literary magazine L’Egoiste in 1988. “Everything that isn’t measured is what matters most.”

After the death of Bettencourt’s husband, French conservative politician Andre Bettencourt, in 2007, the media-shy heiress spent her final years embroiled in a legal spat with their only child, Francoise Bettencourt Meyers.

Under French inheritance law — which dates from the Napoleonic era — Bettencourt Meyers, as the sole child, must receive at least 50 percent of her mother’s estate. She’s credited with the entire estate in Bloomberg’s analysis.

In the 1988 magazine interview, Bettencourt discussed the role that wealth may have played in her personal relationships.

Liliane Henriette Betsy Schueller was born on 21 October 1922, in Paris. She was raised by Dominican nuns.

When she turned 15, she was sent to one of her father’s factories to glue labels on L’Oréal bottles.

L’Oréal owes its origins — and its name — to Aureole, a nontoxic hair colorant Schueller developed in 1907 and sold to Parisian beauty salons.

After her father’s death in 1957, Bettencourt entrusted L’Oréal to his best friend, Francois Dalle, who remained chief executive officer until 1984.

Lindsay Owen-Jones, who became CEO in 1988, turned the company into the global cosmetics giant it is today.

Bettencourt had two grandchildren. Her grandson, Jean-Victor Meyers, replaced her on L’Oréal’s board in 2012.

Lotte Mart exits China, other units may follow
Next Article 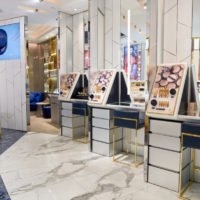